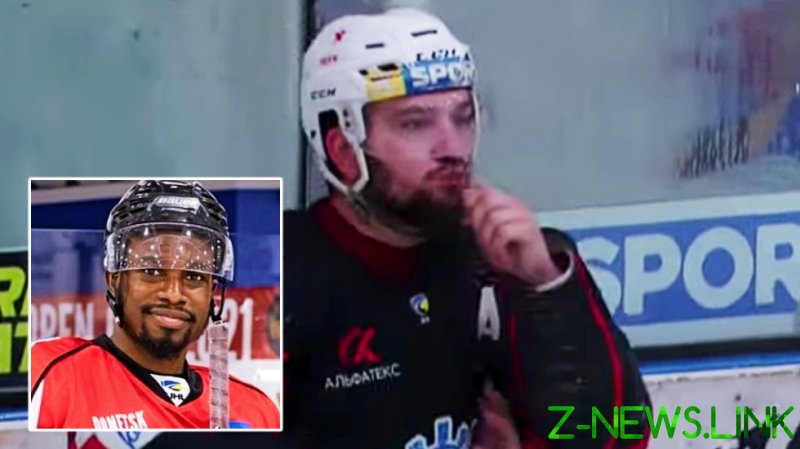 Kremenchuk forward Andrei Deniskin was caught on camera making the bizarre taunt towards new Donbass Donetsk signing Jalen Smereck, clearly mimicking the act while looking at the American in the 36th minute of a league game.

The 23-year-old was sent off and the league has warned that extra sanctions are planned for the Ukraine international following the troubling incident.

Despite the disgraceful footage, Deniskin insisted afterwards that he does not discriminate against people.

“[We reject] any racist manifestations – racism has no place either in sports grounds or outside of them,” they added.

“We will do our best to support our hockey player. At the same time, we call on the Disciplinary Committee to [apply] the strictest possible punishment to the Kremenchuk player.”

The league’s website said: “Such behavior of hockey players on the court is unacceptable within the framework of a civilized society.

“It should be noted that disciplinary proceedings will be opened against the player of Kremenchuk.”

The shameful episode is the second racist provocation to be filmed in a professional hockey match in little more than a month.

In August, forward Stas Petrosyan was fined by his club, Torpedo Ust-Kamenogorsk, when he was seen using his hand to make a slant-eyed gesture at Chinese player Hu Yan during a match in the President’s Cup of the Republic of Kazakhstan.

Deniskin opened the scoring in the first period as part of a 3-2 win for his team at Kremenchuk.

The Detroit-born star is playing outside of the US or Canada for the first time in his career.