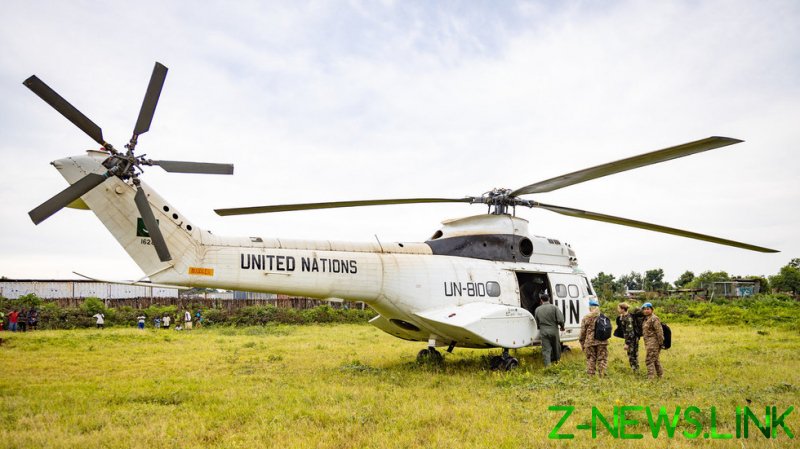 Eight members of MONUSCO, the UN peacekeeping mission in the Democratic Republic of the Congo, have died when their helicopter crashed near the border with Rwanda on Tuesday. The Congolese military accused the March 23 Movement militants of shooting down the helicopter, which the rebels denied.

MONUSCO said the Pakistani helicopter with the tail number 810 was on a reconnaissance flight over Tshanzu, in the North Kivu Province, near the border with Rwanda and Uganda. It went down on Tuesday in the territory controlled by the rebels, known as M23, according to a statement by Congolese military spokesman General Sylvain Ekenge.

In addition to the six Pakistani crew members, the helicopter carried Russian Lieutenant-Colonel Alexey Mizyura and Serbian Lt. Col. Dejan Stanojevic, both serving with MONUSCO. The Pakistani military said all eight died in the crash, but did not specify the cause.

MONUSCO deputy commander General Benoit Chavanat announced on Tuesday morning that the UN force is “not directly engaged in combat” against the M23, but that part of its mandate is to “act in support” of the Congolese military to protect civilians.

The area has seen ongoing fighting between the Congolese military and M23. The Rwandan-backed militants were thought to have been defeated back in 2013, with the help of UN peacekeepers, but rose again in November last year. The Congolese military has accused Rwanda of helping the M23 conduct raids in North Kivu over the weekend.

Meanwhile, Uganda said its armed forces have clashed with M23 near the border with Congo, after the rebels shelled a civilian settlement.

“Our forces responded and 14 rebels were killed, seven were taken prisoners of war,” Ugandan military spokesperson Brigadier Felix Kulayigye said, according to AFP. One Ugandan soldier also died in the fighting, he said.