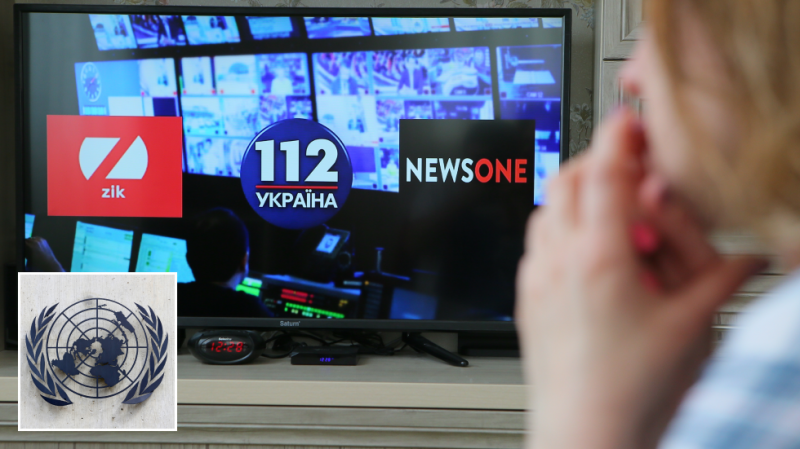 Speaking to journalists at a briefing on Thursday, the head of the team monitoring civil liberties in the Eastern European nation, Matilda Bogner, said that the move to shutter a series of broadcasters and block access to popular news site Strana, as well as a number of Russian publications, is a cause for concern.

Earlier this year, “the National Council for Security and Defense decided, with the endorsement of the president, to apply sanctions which resulted in the closure of the television channels 112 Ukraine, ZIK and News One,” she said.

“On August 20, the National Council for Security and Defense issued another decision imposing further sanctions which have led to restrictions on access to online media outlets,” she added. The move saw Strana’s website blocked by internet providers, with officials declining to give any information on the rationale, and saying only that its editors “are engaged in illegal activities on the territory of our country.”

Bogner said that UN representatives are “concerned that these decisions are not in line with international standards on the right to freedom of expression as they were not taken by an independent authority, and they failed to demonstrate the necessity and proportionality of these restrictions.” She added that the UN “will continue to follow the situation.”

The targeting of Russian-language media outlets, including Strana, has drawn criticism from a number of rights groups, including the Organization for Security and Co-operation in Europe (OSCE), which spoke out against the move last month.

OSCE Representative on Freedom of the Media Teresa Ribeiro said that “while Ukraine has a legitimate right to protect its national security, the authorities should find a balanced and proportional solution in addressing media-related concerns, a solution that preserves media pluralism, free flow of information, and diversity of opinions in line with relevant international standards,” she said.

“Media freedom is dependent on a healthy, vibrant and competitive landscape, which includes voices that provide a variety of news,” Ribeiro added. “Any sanctions on media should be subject to careful scrutiny, accompanied by effective procedural safeguards to prevent undue interference.”

However, Mikhail Podolyak, an adviser to the presidential administration, has denied that the efforts are a worrying sign for free speech in Ukraine, saying that “it’s just about effectively countering fakes and foreign propaganda.” Without action, he argued, the opposition media would “kill our values.”

Bogner also criticized the actions of Russian officials in neighboring Crimea, accusing Moscow of seeking to limit the freedom of peaceful assembly for political activists, including members of the peninsula’s ethnic Tatar community.