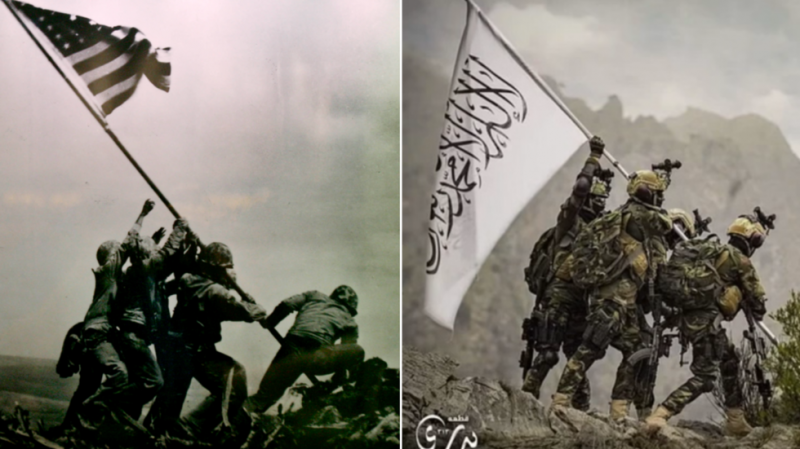 In a photo that ruffled many feathers, mostly among American conservatives, the members of Taliban’s commando unit Badri 313 are seen donning full camouflage and fancy tactical gear, including night vision goggles – seemingly recreating an iconic WWII photo of American troops raising the US flag atop Mount Suribachi during the Battle of Iwo Jima in 1945.

“No Enemy has EVER done this to America, befouled Iwo Jima’s eternal sacrifice, whilst wearing our equipment. Until Biden. He has betrayed all Americans, alive and dead,” said Sebastian Gorka, a former official in the Donald Trump administration.

Much of the outrage and indignation was directed personally at the US commander-in-chief, Joe Biden, who has faced mounting criticism for the chaotic withdrawal.

“Biden must resign or be impeached and removed,” reacted television commentator John Cardillo, who was recently a host at Newsmax TV. “This just keeps getting worse and worse!” added podcast host and a former Navy SEAL, Jonathan Gilliam.

“We’re a laughing stock of the world,” summed up conservative columnist and former TV host Meghan McCain, the daughter of the late Republican Sen. John McCain.

Over the past several weeks, even before the Taliban’s blitzkrieg on Kabul, videos have emerged showing militants inspecting spoils of war, including US-made weapons seized from the Afghan National Army (ANA). The ANA completely collapsed as the US-led coalition began to accelerate its withdrawal, with some units surrendering without a fight, and handing their weapons and equipment over to the militant group.

According to some estimates, the Taliban may now be in possession of more than 2,000 US Humvees and other armored vehicles, and as many as 40 aircraft – including Black Hawks, scout attack helicopters, and military drones. It may also take advantage of the vast arsenal of 600,000 M16 assault rifles and other infantry weapons, some 162,000 pieces of communications equipment and 16,000 night-vision goggles, gifted by the Pentagon to Afghan forces since 2003.

Biden meanwhile pushed back against critics of the withdrawal, blaming Afghanistan’s leaders and military for failing to stand up to the Taliban, and insisting that the US military did all it could for Afghanistan during its nearly 20-year occupation of the country.