Ulefone Armor X7 was the first protected smartphone with Android 10

China has shown a new smartphone Ulefone Armor X7 for those who don’t know how carefully to use the equipment. The device has a very rugged and at the same time before everyone in your class has got a firmware based on Android 10. 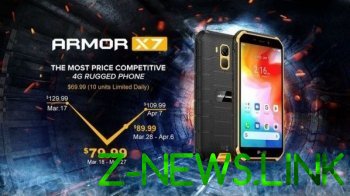 Case Ulefone Armor X7 is protected according to the standards of IP69K and MILSTD810G, so he’s almost armored. Inside it has a very large battery 4000 mAh, which, given only 2 GB of RAM and a small screen, enough for a very long time. In General, all that is interesting have the Ulefone Armor X7 is its battery and the body, because otherwise this is a smartphone the most basic level.

By default, it costs about 130 US dollars, but before March 27 it price reduced to $ 80, and from 27 March to 6 April it will be available for $ 90. In our opinion, for the money, its purchase is justified, but 130 bucks is already too much. A list of characteristics of the smartphone Ulefone Armor X7 includes a built-in storage of 16 GB, a MediaTek processor and even NFC chip for contactless payment. At the end of it.. Buy Ulefone Armor X7 can only be in China – in Russia it will not be sold.