Ukrtelecom will replace landlines for mobile 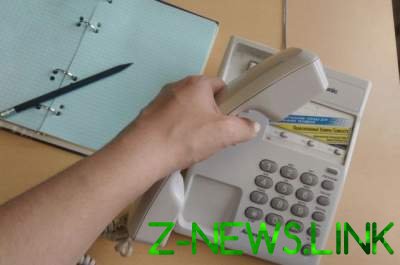 Ukrtelecom has launched a pilot project.

Ukrtelecom has launched a project on implementation of convergent services, combining fixed line and mobile communications, to restore telephone service after the theft of cable.

Telecom operator Ukrtelecom on Tuesday, 14 August, launched a pilot project on restoration of fixed local communication based on mobile networks in the first town of Yellow Waters Dnipropetrovsk region. This is stated in the message of the company.

See also:  In Russia at a military training ground fire caused an explosion

It is noted, Yellow Water is one of the cities most affected by the theft of telecommunications cable.

“Unfortunately, the numerous repairs already do not solve the problem, because the new cable back cut. And thousands of subscribers are left without communication”, – stated in the message.

For the pilot project uses a fixed network of Ukrtelecom and the mobile operator Trimob. Subscribers retain their phone number, dial the other rooms. The subscriber receives calls and calls from their landline numbers, using the rates of urban telephony. The only thing that changes is a landline telephone in which the SIM card of the operator Trimob.

In a pilot project to be subsequently involved several cities. If he is successful, Ukrtelecom will scale the project in Ukraine.