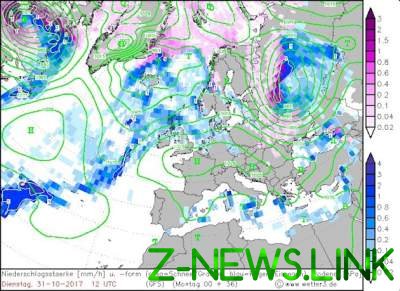 Monday, October 30, in Ukraine is expected deterioration of weather conditions.

So, gusts of wind throughout the country will reach 17-22 m/s, and in Western and southern regions of the sea of Azov sometimes up to 25-30 m/s.

“On 30 October, starting with the Western regions, the expected heavy rain with transition to snow, places a Blizzard, in the Western part, the formation of snow cover, temperature lowering by night and by day to +1… 6 degrees” – it is told in the message.

In Kiev and the region also is expected wind increase up to 17-22 m/s, with gusts at night up to 25 m/s; occasional rain with transition to snow, lowering the temperature by night and by day +1… 6 degrees.

Also, the SES has warned that on October 30 in connection with the expected heavy rainfall in the Carpathian mountains there is the danger of mudflows.

According to Ukrgidromettsentra, the rains are expected in all regions of Ukraine and in the West, in places in Vinnytsia, Zhytomyr, Cherkasy, Kirovohrad region – with sleet, and in the highlands of Carpathians – the snow and sleet.

See also:  Ukrainians have shown the main stage of "Eurovision-2017"

In the river rain. The temperature during the day +5… +9 degrees.

In Kharkov will be rainy. The temperature during the day +5… +9 degrees.

In Odessa, no significant precipitation expected. Temperature of +9… +11 degrees.

In the Carpathians, rain with sleet. A strong West wind. The temperature during the day 0… +6 degrees, in the highlands of 0… -5 degrees.

As noted on his page on Faceebook forecaster Natalia Didenko, abrupt changes of weather are connected with raging in Europe hurricane “Hervert”, which has already claimed the lives of 7 people in Germany, the Czech Republic and Poland.

“Hervert “dived” from parts of Scandinavia to the South, up to the Ukraine, but now he turns and tomorrow “emerges” in the European territory of Russia, in the Moscow region. “Diving” is convenient to call such cyclones, and our visual perception of maps from North to South – from the top down,” she wrote.

She also said that in Ukraine the last days of October will culminate in a powerful wind.

“On October 30-31 North-West wind will reach gusts 15-22, seats 25-27 meters per second. Be very careful. Will be rain. Today rain is transitioning to snow, tomorrow this phase, precipitation – wet snow – more. In the southern part – in places a small rain,” she said.

“In Kiev tomorrow rain and wet snow complicated the situation on the roads – go today for winter tires, during the day 4 degrees. And again newsmaker weather will be strong winds in the capital! 1 Nov strong winds will weaken to moderate. November 2 will increase temperature”, – said Didenko.