Ukrainians reminded about the main religious holidays of November 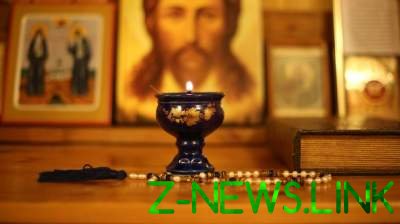 Preparing for the Christmas fast.

“The year ends, and every month brings many joys and challenges. When the year comes to a close, we have good and bad to leave in the past — admonishes the Deputy kiyevo-Pechersky monastery the Metropolitan Vyshgorodsky and Chernobyl Paul. — We need to prepare your state of mind to report what I did. Can we start the year with a clean slate? I think I can. If we get up in the morning and going to bed in the evening, saying, “Lord, bless this day” and “Lord, thank you for this day.” Simple words, but from a pure heart.”

“He is always and everywhere ready to listen to us”

“In November a lot of holidays, but first and foremost this month is the beginning of advent, reminds Bishop Paul. — Always be in prayer. The St. Tikhon of Zadonsk said that prayer is not only is to stand and to bow the body before God, and prayers written to be read, at any time and any place in mind and spirit to pray. Can walking, sitting, lying, on the road, meals, case making, in public and in privacy to God the mind and heart to take mercy and help we ask of Him. For God is everywhere, doors opened to Him and access to It is convenient — anywhere, anytime He is ready to listen to us and to help us.” 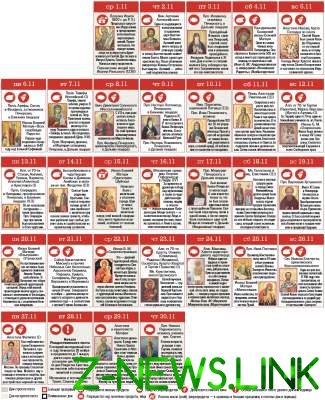 TOP dates of the month from Bishop Paul

1 November — day of memory of Holy relics of venerable. St. John Of Rila. The monk lived in the tenth century and lived in Ryl’sk the desert, where there were only wild beasts. For many years he lived alone in the deep empty cavern. And so unaccustomed to people that, when it came to the nephew, Luke, he thought it was the work of the devil. Later on I realized that it was his nephew. All his life he ate only grass. Seeing his gentleness and faith, the Lord made it so near his accommodation began to grow the beans. They monk all his life fed and fed all travellers.

5 years before his death, he wrote “a Testament to disciples” — one of the best creations that have survived to this day. A few quotes that has become a cruise: “And most of all run themselves from the covetous snake, for the love of money is the root of all evil, according to the Apostle, who calls his second idolatry. For monk wealth is not silver and gold, but perfect poverty, the renunciation of his will and sublime humility.” “Manual labor let it not be neglecting you, but let your hands be it always, and the prayer: “Lord Jesus Christ, Son of God, have mercy on me, a sinner,” be continually in your mouth, like your mind, the remembrance of death”.

November 2 — the day of memory of great Martyr Artemius (III century). When the Saint publicly rebuked the Emperor Julian, apostates from Christianity (for which he was surnamed the Apostate) in the worship of the pagan gods, he was thrown into prison. There the Lord appeared to him and said, “take Courage, Artemius. I’ll save you from all pain and make you a crown of glory for your faith in Me.” Artemia was tortured by terrible tortures, but the Saint took them without moaning. When he had told Julian what will happen to those retribution, Julian ordered Artemius beheaded. After a time the punishment overtook Julian. He was betrayed by his allies. During the battle he was mortally wounded by an invisible weapon. According to legend, when dying, Julian said: “Thou hast conquered, Galilean!”

After the death of the Emperor-the apostate relics of the Holy great Martyr Artemius was transferred with honor from Antioch to Constantinople.

Also on this day, the memory of the Holy great Princess Alexandra Romanova. The Princess was baptized, began to go to Church. The Psalter was for her a source of eternal joy. Soon, however, she began to have health problems — she could not walk and asked to take her to a convent. Sold all my jewelry, Princess Alexander built a monastery for women and began to live there in fasting and prayer, becoming a nun Anastasia of Kiev-Pokrovsky. And soon with God’s help began to walk. Her relatives came and helped to rebuild the monastery.

In 1900 she was buried in the monastic cemetery, and her grave is still intact.

3 November — St Hilarion of the Kiev. The first Metropolitan of Kiev lived in the time of Prince Yaroslav was his Confessor. He is the author of the first Russian literary and philosophical works “sermon on Law and Grace”. Books written by the Saint, is still considered in the Church the basics of the faith.