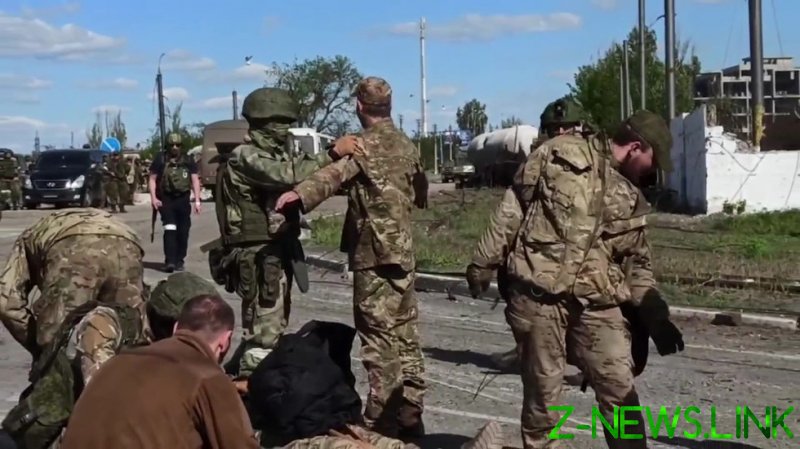 17 May, 2022 17:02 HomeRussia & FSU Ukrainian troops holed up in Mariupol begin surrendering Kiev puts on a brave face as trapped Azov fighters give themselves up to Russian forces 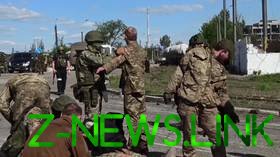 The last remaining Ukrainian troops in the southern port city of Mariupol have started surrendering, after being trapped for nearly a month in the Azovstal steelworks. The massive industrial complex, with a network of underground tunnels and bunkers, was the last bastion held by Ukrainian forces.

The city is otherwise controlled by Russian troops and the militias of the Donbass republics. The Donetsk People’s Republic (DPR) claims Mariupol as part of its sovereign territory.

Since the start of the week, over 250 Ukrainian fighters have surrendered to Russian troops in Mariupol, the Russian Defense Ministry reported.

Why is Mariupol so important?
Mariupol is a major port on the Azov Sea and an industrial powerhouse that hosted some of the biggest steel mills in Ukraine.
Back in 2014, when conflict first erupted between Ukrainian government forces and Donetsk rebels, Mariupol saw intense street fighting, during which so-called volunteer battalions of Ukrainian nationalists took control of the city.
Mariupol had since served as a base of operations for Azov, one of the volunteer militia units that ended up being incorporated into Ukraine’s National Guard. Azov members openly hold neo-Nazi views, while the unit’s iconography was inspired by the SS.

What is Azovstal?
Azovstal is a steelworks plant that traces its origins to the Soviet industrialization effort of the 1930s. The facility is located near the coast in the middle of Mariupol, has its own port infrastructure, and extends over an area of around 11 square kilometers. It employed well over 10,000 people in recent years.
Like many other Soviet-designed sites, it has an extensive system of underground tunnels and shelters, which were originally designed to protect workers from air raids in the event of war. Because of that, it became the designated fallback site for Ukrainian troops fighting against Russian and DPR soldiers laying siege to Mariupol.

Why was there fierce fighting for Mariupol?
The city was one of the primary targets for Russian and allied troops in the first phase of the Ukraine campaign, which Russia launched in late February. The city was blockaded in early March and saw some of the most intense fighting in the conflict. Moscow and Kiev repeatedly accused each other of thwarting attempts to organize the evacuation of civilians out of the city and to bring in humanitarian aid.
In mid-April, a unit of Ukrainian marines surrendered after a failed attempt to break out of another Soviet-era metallurgical plant in Mariupol. This made Azovstal the final remaining Ukrainian stronghold in the city.
On April 21, Russian President Vladimir Putin publicly granted the request of the Russian military to not storm Azovstal, ordering instead the facility to remain blockaded until the fighters trapped inside are pressured into laying down their arms.

How many troops are we talking about?
It’s not clear how many Ukrainian fighters remain holed up at Azovstal. Ukrainian officials reported on Monday that around 600 of them were injured, including 40 in serious condition. Kiev threatened to cease all talks on a peace settlement with Russia if these troops end up dead.
Russian Defense Minister Sergey Shoigu told President Vladimir Putin last month that more than 2,000 militants loyal to Kiev remained entrenched at Azovstal.

Why did Kiev want to save Azovstal?
Supporters and family members of the trapped Ukrainian fighters have been campaigning for weeks, including via requests to foreign leaders and public figures such as Pope Francis, to put pressure on Russia and secure their release. Even the Ukrainian band that won the Eurovision Song Contest last week contributed to the effort, pleading for help for the Azovstal garrison in what appeared to be a clear violation of the music event’s rules.
Figuring prominently in the publicity campaign have been the wives of some of the stranded fighters, a few of whom accused “traitors” in the Ukrainian military of abandoning their husbands to die.
The Russian military repeatedly offered those trapped inside the plant to surrender, but they had refused – until now. Instead, the Ukrainian forces and nationalist militias holed up there appealed to Kiev and “third nations” to facilitate their “extraction.”
Russia had previously accused the Ukrainian soldiers and neo-Nazi fighters occupying the plant of holding civilians hostage there in order to barter for supplies.
Russia allowed international aid groups to organize the evacuation of civilians, which was completed by May 7. Some of those who left the plant chose to remain in DPR-controlled territory, while others were ferried to Kiev’s side.

What does Ukraine mean by ‘combat mission completed’?
As groups of fighters from Azovstal started surrendering, Kiev appeared to give them the green light. A statement released by the Ukrainian military leadership on Monday declared the mission in Mariupol “completed” and said it ordered commanders of the unit to save the lives of their soldiers.
Injured soldiers were taken to a hospital in Novoazovsk, a small port to the east of Mariupol that has been under DPR control since 2014. Ukrainian officials made it clear that they expected to see Ukrainian regular troops exchanged for Russian prisoners of war, but the fate of the Azov militants remains uncertain.