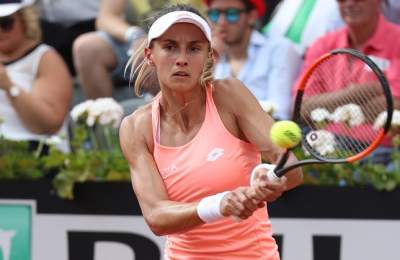 Ekaterina Bondarenko, Lesia Tsurenko and Kateryna Kozlova has lost the starting matches of the tournament in Tianjin with a prize Fund of $500,000.

Tsurenko in the status of the seventh racket of the “Tianjin Open” in the first circle lost to the 93-th racket of the world Injin Duan. In the course of the second set from Kiev was leading 4:0, but managed to lose such a significant gap.

In the match against Duan Tsurenko has served 2 aces, made 3 double faults, made two breaks and not smog to save four break-point rival.

Bondarenko missed the victory in the match of the 71-th racket of the world of Poland’s Magda linette. The key moment of the match came in the 11th game of the decisive set when Bondarenko with the score 5:5 lost his serve and could not return to the game.

Bondarenko in the first and only match in Tianjin filed 3 ACE, made 6 double faults, has organized two breaks and four times lost his serve.

Kozlov suddenly fell into a match with former finalist in Roland Garros, Sara Errani. A native of Nikolaev in the game with 280-th racket of the world several times exceeded the limit unforced errors that cost her a crushing defeat.

In the match against Errani Kozlov has served 2 aces, made 3 double faults, scored two breaks and six times lost her serve.