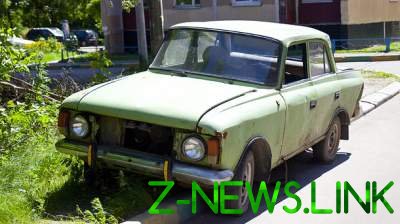 In Ukraine was 9.1 million vehicles. Half of them come from the Soviet Union or the CIS. And every fifth car of Ukrainians older than 30 years. In 2013, the deputies adopted the law, according to which the old machine had to be disposed of. To do this, the country has introduced an environmental tax on imported cars. Depending on engine version, the tax was 4.7-30 thousand hryvnia for the car. The money had to go for recycling. But the collection quickly reversed, and the law remained. Soon, however, Ukraine can once again raise the issue of recycling of old cars. The Ministry of ecology and natural resources is completing work on a National strategy waste management. The document will be registered and recycling machines. Moreover, environment Minister Ostap Semerak has proposed to impose machine environmental fee. Reporters learned, why recycle the old vehicles, and car owners.

Half of the cars in Ukraine must be disposed of

In Ukraine 27% of cars older than 30 years and 47% of cars aged 10 to 30 years. The older the car, the more environmental damage it causes in the soil are lead, mercury, oil, residues of fuel and oil substances, rust. In the EU the average life of car 10 years. Then the car owner should be removed from the register and disposed of. Ukraine also tried to introduce a system of recycling of old cars. In 2013, the country entered into force the law “About utilization of vehicles”, according to which the country was supposed to be a network of recycling centers. It was planned that the state will reimburse the cost of disposal of businesses and on all new cars introduced recycling. But in 2014, a new tax was canceled because of pressure from motorists and business.

The law was originally written incorrectly, the Director of the Ukrainian Association of automobile importers and dealers Oleg Nazarenko. It is not specified what cars are to be disposed. No requirements for age transport, nor its technical condition, the deputies are ordered. Is it that recycling is voluntary. Therefore, the Ukrainians have rushed to take their cars for recycling. A network of recycling companies and has not appeared.

“The order of disposal of cars in Ukraine is regulated by the law “About utilization of vehicles.” To transfer the car to the scrap you must first remove it from the register. But the legislation does not provide cases of mandatory renting a car for recycling,” confirms Director of legal Affairs of the company “Octave Capital” Tatyana Andrianova.

In addition, the law does not encourage to donate cars for recycling. For example, in France, if a citizen does not pass the vehicle for recycling after end of life, he faces a fine of 75 thousand euros. Norwegians pay $ 350 when buying a car, the money is returned upon delivery of the transport for disposal. Ukrainians, at best, dismantled old car parts. Something to hand over on scrap metal, sell something, and the tires make flower beds or equip their playgrounds. The government sounded the idea to pay the Ukrainians for the disposal of the machine is 12 thousand hryvnia. But then the proposal was not supported.