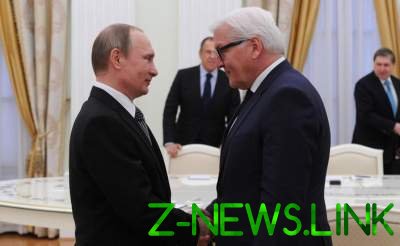 The Ambassador of Ukraine in Austria showed how the Russian media deliberately twisted the words of the German President about the Crimea.

In Russia the media have twisted the words of the President of Germany Frank-Walter Steinmeier, attributing his words about “reunification of Crimea with Russia.” About this on his page in Facebook wrote to the Ambassador of Ukraine in Austria Alexander szczerba.

See also:  Videohit: the dog chased the bear out of camp. Video

“About 8 minute 15 second you can see how the work of a totalitarian fake news. Steinmeier said in German: “Annexion” (the Annexation. – Ed.). The translator goes astray and translates: “Reunification with Russia “, – wrote Shcherba.

He has also published a video in which you can listen to the statement of Steinmeier about the annexation.

At the same time, the Russian representative, who was translated from German to English, after hesitation said “reunification of the Crimea with Russia.”

Earlier, rossm threw a fit because of the Ukrainian stars-“traitors”.