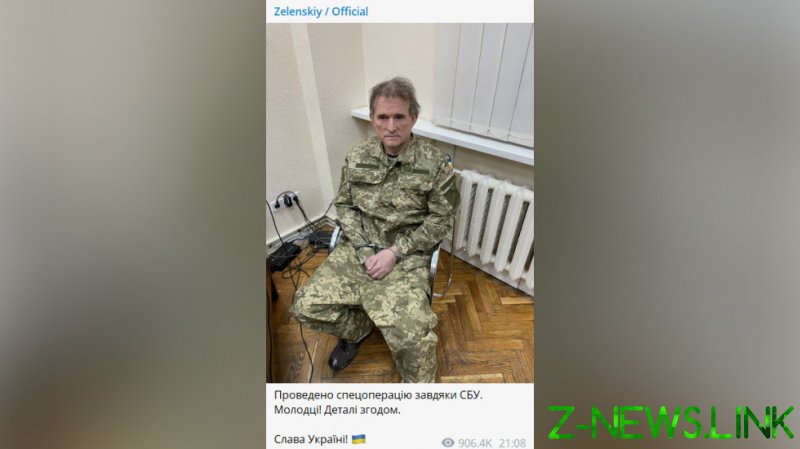 Ukrainian President Volodymyr Zelensky expressed his delight on Tuesday after Kiev’s successor to the Soviet-era KGB arrested the country’s most prominent opposition leader.

The President shared a photo of his handcuffed rival Viktor Medvedchuk on social media, with the caption: “A special operation was carried out by the SBU. Well done! Details to follow.”

Medvedchuk heads the second largest party in the national parliament, the “Opposition Platform – For Life.” He was previously placed under house arrest, last year, as part of Zelensky’s clampdown on dissent, which was granted tacit approval by the regime’s Western supporters.

Formed in 1991, to replace the KGB, the SBU is Ukraine’s main intelligence and security agency.

Medvedchuk, who opposed the 2014 Kiev Maidan, and believes the country’s Western turn to be detrimental to Ukraine’s interests, has led his party since 2018. He previously served as Chief of Staff to former President Leonid Kuchma, in the early 2000s.

Some Western commentators have labelled him as Vladimir Putin’s “closest ally in Ukraine.” However, the Russian President has described Medvechuk as a “Ukrainian nationalist.” 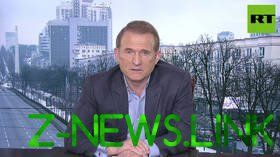 In 2019, Opposition Platform – For Life won 13% of the vote in a parliamentary election, making it the country’s largest opposition faction. Last year, polls showed that it had passed out Zelensky’s Servant of the People as the most popular party in the state.

That seemed to prompt a crackdown by Zelensky, who closed media outlets associated with Medvedchuk. Soon after, the politician was arrested on politically motivated “treason” charges.

Medvedchuk has rejected accusations of being “pro-Russian,” insisting his party represents millions of ordinary Ukrainians. In February 2021, he accused Zelensky of seeking to establish a dictatorship in Ukraine and suppress the legally elected opposition.

Authorities in Kiev also charged Zelensky’s predecessor Petro Poroshenko with treason, back in December 2021 – on the same charge as Medvedchuk: illegally buying coal from the breakaway regions of Donetsk and Lugansk and thus “financing terrorism.” Poroshenko made a big deal out of publicly returning to Ukraine in January, and a Kiev court refused to jail him.

Unlike Medvedchuk, Poroshenko has substantial support in the West. 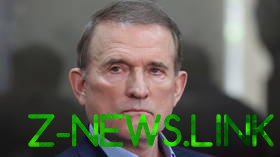 The US and its allies have sought to justify their support for Ukraine by saying Zelensky is a democrat fighting for freedom, and have presented Russia’s actions towards Kiev as motivated by a fear of democracy.