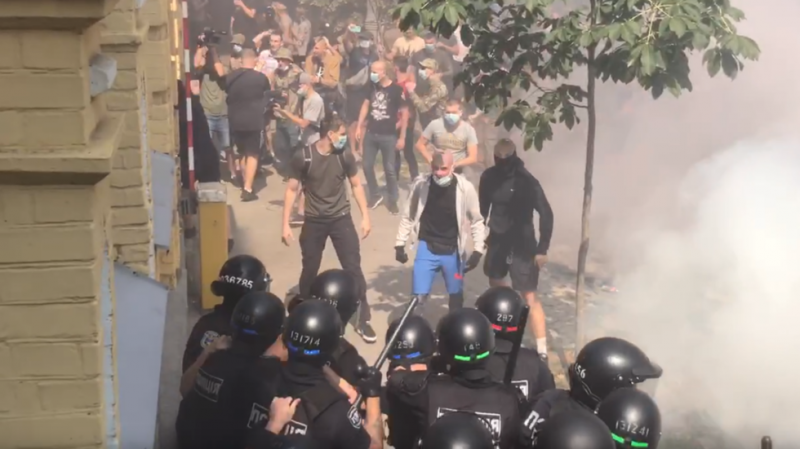 A large crowd of supporters of the right-wing National Corps party gathered outside the office of Ukraine’s President Volodymyr Zelensky on Saturday, to protest the arrest of seven of its members earlier in the month. They were held on suspicion of extorting money from businessmen in the city of Kharkiv, but the radicals have instead accused the head of state of “repression against patriots” and promised to retaliate.

The National Corps party is mainly formed of veterans of the infamous Azov battalion, which fought on Kiev’s side during the most heated phase of the ongoing conflict in eastern Ukraine and has faced accusations of torture and war crimes. The party, headed by former Azov commander Andriy Biletsky, has been around since 2016. It pursues a far-right ideology, calling for reinstatement of Ukraine’s status as a nuclear power and for the expansion of rights to bear arms, and it opposes membership of the EU, among other things. In its 2018 report on the state of human rights in Ukraine, the US State Department labeled the National Corps as a ‘hate group.’

Many participants in Saturday’s rally were sporting military-style uniforms and chanted nationalist slogans.

The police said that clashes broke out after the nationalists refused to undergo checks for forbidden items and attempted to force their way to the president’s office. The protesters tossed flares and bricks from the pavement at law enforcers in full riot gear, while also employing what looked like tear gas.

Seven police officers suffered burns during the unrest, while a member of Ukraine’s military got an injured hand, according to a police spokesman. The National Corps took to social media to accuse the police of staging a “provocation,” adding that there were also injuries on their side.

The situation in central Kiev eventually calmed down, though the nationalists continued to rally and chant anti-government slogans.

The radicals want Zelensky out over what they see as a betrayal of Ukrainian national interests in Donbass, where self-proclaimed Republics of Donetsk and Lugansk declared independence from Kiev in response to a 2014 coup in the capital. They insist that the government shouldn’t negotiate with Donbass, but should end the lasting conflict through military means.