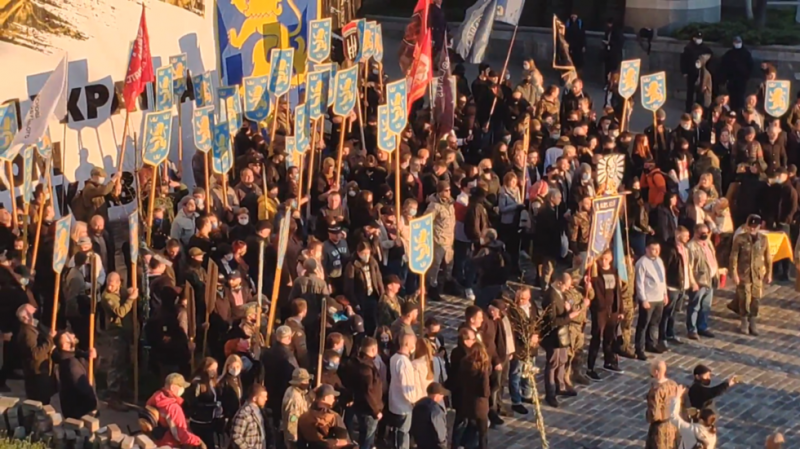 According to the TASS news agency, about 100 people from various far-right nationalist groups participated in a celebration of the military division’s 77th anniversary.

In response to the march, the country’s second largest parliamentary grouping ‘Opposition Platform – For Life’ asked for a “tough reaction” against the Nazis, and demanded that the organizations who arranged the event be banned. The party also noted what it deemed to be hypocrisy on the part of President Volodymyr Zelensky’s government, explaining that the authorities are blocking the traditional WWII Victory Day parade marking the Soviet victory over Adolf Hitler’s Germany. Kiev officials claim this is due to Covid-19 restrictions, but they did not apply the same rules to Wednesday’s radical march.

Created in Lvov in 1943, SS Galicia was made up predominantly of Ukrainian volunteers who wanted to take up arms for Nazi Germany against the Soviet Union, and mainly fought against local partisans. The unit was almost wiped out in the 1944 Battle of Lvov–Sandomierz, and later saw action in Slovakia and Austria. In 1945, it rebranded as the Ukrainian National Army and lasted until the end of the war in May that year.

The SS itself was the military branch of Hitler’s Nazi Party, and was primarily responsible for planning the Holocaust. The organization is banned under the laws of Ukraine.

On Wednesday evening, supporters of SS Galicia met in the center of Kiev on Arsenalnaya Square, and walked for half an hour to Maidan Nezalezhnosti, the city’s Independence Square. At the end of the march, the Nazis hung a banner on a bridge, depicting soldiers in Nazi uniform. Local police blocked off the road to facilitate the celebration.

The event also struck a nerve in the German Embassy in Kiev, and Ambassador Anka Feldhusen warned Ukrainian nationalists not to associate themselves with Nazi war criminals.

“Waffen CC units participated in the worst war crimes and the Holocaust during World War II. No volunteer organizations fighting and working for Ukraine today should be associated with them,” she wrote on her Twitter page on Wednesday.