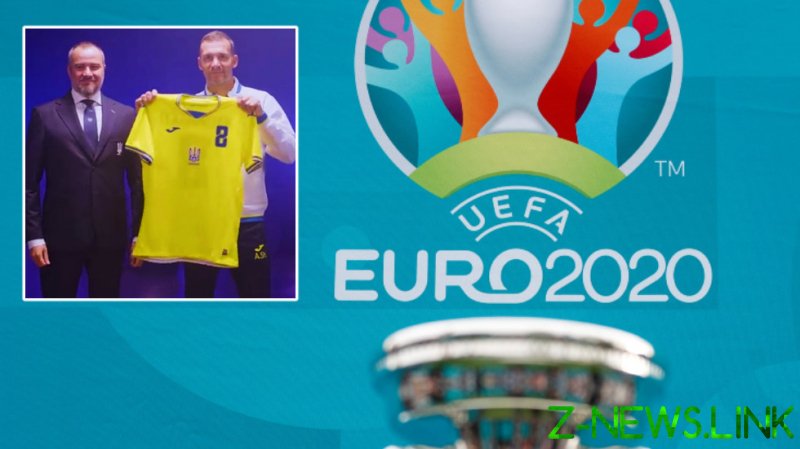 The look of the yellow-and-blue kit, which Ukraine’s national team intends to potentially use at this month’s cross-European showpiece, makes room for a map showing the Crimean Peninsula, which was made part of Russia following a referendum held on the territory and the signing of the accession treaty in 2014 in the midst of the Ukrainian revolution.

In an unusually detailed move, the shirt also contains an inscription which reads: “Glory to Ukraine. Glory to heroes”.

Dmitry Svishchev, a deputy of the State Duma, called the design an “absurdity” and a “strange act”, encouraging the Ukraine Association of Football (UAF) to reverse its decision.

“Crimea has been an integral territory of Russia for seven years,” he told RT. “I am sure that UEFA should react strongly to what has happened.

“The Ukrainian national team still has time to [create] a new uniform in order to go to the European Championships not to work out political slogans, but to fight for the honor of their country in their favorite sport.”

By contrast, politician and UAF president Andriy Pavelko beamed that the shirts, showing what he described as the “only and undivided homeland”, would inspire Ukraine when they face the Netherlands, North Macedonia and Austria in the group stage of the competition.

“We believe that the silhouette of Ukraine will add strength to the players because they will fight for the whole country,” he explained, adding that the purported extra motivation is “extremely important” for players who are desperate to do well at the finals.

Ukraine manager and Champions League winner Andriy Shevchenko gave his public backing to the shirts and took part in a photoshoot to promote them, while Russian Football Union (RFU) honorary president Vyacheslav Koloskov was said to have suggested that tournament organizers UEFA would prohibit the move because of regulations over flags and symbols.

Anatoly Vorobyov, the former General Secretary of the RFU, said he felt that UEFA was unlikely to become involved.

“It’s another matter if an official protest comes from Russia,” he added, claiming that “hallucinogenic mushrooms” could have influenced designers.

“In the meantime, [UEFA] have a more serious task in the form of holding the European Championships in several countries in the context of the coronavirus pandemic.

“You shouldn’t make a serious informational occasion out of what happened. Everyone uses these things to promote certain political views. I don’t want to seem banal but sport should remain outside of politics. Unfortunately, in our time, this is not always the case.“

Shevchenko’s side begin their campaign against the Netherlands on Sunday, a day after Russia play their first group stage match against Belgium in St. Petersburg.