Ukrainian airport disgraced for the map of Ukraine without Crimea 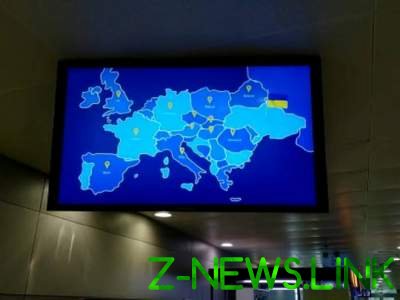 The movie was made for the budget money.

At the airport “Borispol” on one of the boards shows a map of Ukraine, which occupied the Crimea. Photos in Facebook published blogger Denis Pyatigorets.

We will remind, on March 31 during the first round of presidential elections the map of Ukraine without Crimea noticed at the polling station in a school in Kiev.

Pyatigorets angrily asks: “Why on the screens of the main air gate of Ukraine at the airport “Borispol” in the video, which should advertise our country UkraineNow depicted Ukraine without the Crimea?”

The blogger writes that the movie was made for the budget money. Why in this case no one is responsible for the result.

According to him, the question is not primarily refers to those who edited the video, and to those who took the job, signed the acts.

“The question is, can this degenerate deprived of citizenship? And broadcast it sad face on those same screens with the message “it is not believed that Crimea is Ukraine!” But first, let him sell his house and return to the state money that paid for this video!!!”, – outraged resident of Pyatigorsk.