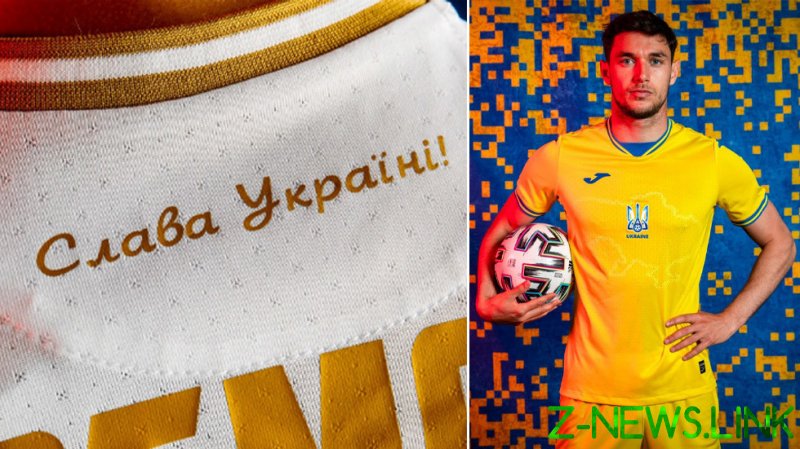 The yellow and blue shirt, shown to the public on Sunday, is branded with the words ‘glory to Ukraine’ and ‘glory to heroes’. While the slogans have a long history, dating back to the writings of the country’s national poet, Taras Shevchenko, in the 1800s, they have since gained more sinister associations. Both phrases were used by members of the Organization of Ukrainian Nationalists (OUN) and the Ukrainian Insurgent Army (UPA), paramilitary groups that historians say fought alongside the Nazis and played significant roles in wartime genocides.

The far-right OUN, led by nationalist figurehead Stepan Bandera, is understood to have been the driving force behind the bloody massacres of up to 100,000 ethnic Poles from 1943-45, as part of its quest for Ukrainian independence. Along with the UPA, it participated in the murder of more than one million Jews across the country, which saw among the most brutal destruction of its population at the hands of fascist troops.

Writing on Twitter, Eduard Dolinsky, the director general of the Ukrainian Jewish Committee, made the link between the slogans and the activities of the OUN-UPA, which he argued “is wartime organization of Ukrainian nationalists that heavily participated in Holocaust and killed 100 thousand peaceful Poles in ethnic cleansing.”

Since the 2014 Maidan, the groups, historically lionized by neo-Nazis and the far right, have seen their reputation rehabilitated by mainstream politicians in Ukraine, credited as fighters for the country’s freedom. As well as staging paramilitary operations to destroy Polish and Jewish communities, they also fought against the Soviet Red Army as it desperately battled against Nazi German forces in Eastern Europe.

In March, officials in the Western Ukrainian city of Lvov, one of the Maidan’s key strongholds, announced that they would seek to rename its main sports stadium after Bandera himself. There is already a large statue of the Nazi collaborator outside Lvov’s main train station.

At the same time, a separate row broke out after Israel’s ambassador in Kiev slammed a decision to name nearby Ternopil’s arena in honor of Roman Shukhevich, a UPA leader who served with a rank equivalent to a captain in a Nazi German auxiliary police battalion, and is said to have been involved in ethnic cleansing. Shukhevich commanded the Nachtigall Battalion, a collaborationist unit that fought on the side of the Nazis and has been accused of taking part in pogroms in the city of Lvov.

Ukraine’s uniform for the Euro 2020 tournament has simultaneously sparked outrage in Russia, as it features a map of the country that includes the Crimean Peninsula. The territory was reabsorbed by Moscow in 2014, but Kiev still maintains its claims over the region.

The head of the Ukrainian football association, Andriy Pavelko, defended the uniform at its unveiling on Sunday, saying, “we believe that Ukraine’s silhouette will give strength to the players because they will fight for all of Ukraine.”

However, Russian Foreign Ministry spokeswoman Maria Zakharova added her voice to the criticisms of the design, mocking the claims that the contested map would improve its players’ performance, adding that “it is a pity this is their only hope.” She called its depiction of Ukraine, including Crimea, “impossible,” and said that officials in Kiev were actively working to whitewash history with the inclusion of the slogans.

While a number of fans have called for the kit to be banned by the competition’s organizers, UEFA, the sport’s governing body, gave it the green light to be used on Monday. “The uniform of the Ukrainian national team… has been approved by UEFA in accordance with the applicable rules regarding equipment,” it said in a statement.