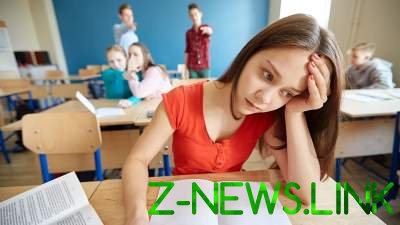 Ukraine takes the 4th place among European countries and 7th place in the world.

About 80% of children while learning in school face bullying, intimidation and harassment of other children. This was discussed at the press conference, “Stop school violence how to stop child abuse” which took place in Kiev on November 28.

Ukraine takes the 4th place among European countries and 7th in the world in terms of manifestations of aggression among school-age children.

For many people, the model forced the realization of their interests becomes more attractive. Because in their minds it is more efficient. People see that thus it is possible to achieve certain results. This policy, the raiders and just people on the streets. But the most dangerous phenomenon in our society is the growth of a culture of violence among children — said the Director of the Ukrainian research Institute of extremism (OUIDAH) Oleg Zarubinskyi.

The children themselves perceive violence as a form of behavior, because I see that the pursuers have a certain popularity and influence. The victim of bullying becomes every 5th child. While in Ukraine, every year about 2500 children are trying to commit suicide, and in 40% of cases the cause of this is bullying.

— When a child commits suicide, he really doesn’t understand consequences. It seems to him that will save him, and the parents finally begin to pay attention to it. Also, in the opinion of the child, his life is a fair punishment for the violence, which made Buller — said the study’s author, Deputy Director of OUIDAH Bogdan Petrenko.

According to him, bullying also has a negative impact not only on the victim but on society as a whole.

From bullying all suffer. Both victims and persecutors, and the witnesses. This and mental disorders, and impaired intellectual abilities, diseases, low immunity, headaches, as well as social consequences: isolation and asocial behavior, communication problems in childhood and in adult life, low ability for career growth, alcoholism, drug addiction, crime, — said Petrenko.

In order to reduce the level of violence among children of the Ukrainian research Institute of extremism has developed a media project that will appeal to children and their parents. So, at the end of January will be a presentation of the exhibition with shocking images of bullying and its consequences. In addition, Ukrainian stars will tell their stories of bullying, thereby showing by example that bullying did not prevent them to succeed.