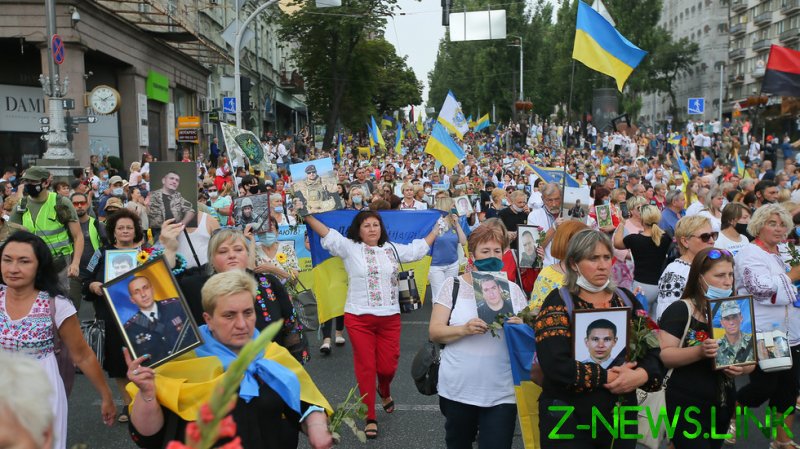 The decision of the national Supreme Soviet, or Rada in Ukrainian, to declare itself sovereign on August 24, 1991 was the pivotal turning point in its shared history with Moscow. A few months later, the declaration was backed by a referendum with a high turnout and more than 92% of voters supported the measure.

This was, in part, a response to the failed coup by Communist diehards, in the now-Russian capital, trying to preserve a crumbling Soviet order. The same coup fatally undermined Mikhail Gorbachev, the first president of the Soviet Union and last general secretary of its ruling Communist Party. The putsch crushed his plans to keep the Soviet state together, albeit in a different format. The “amateur coup,” as it became known, also boosted the rise of Gorbachev’s nemesis Boris Yeltsin, already president of Soviet Russia, and soon-to-be president of a new post-Soviet, oligarchic-capitalist state.

In the end, the inept plotters only speeded up the dissolution of the Soviet Union. What had started with the Communist coup of October 1917, led by a young, hubristic, and brilliant organizer (Leon Trotsky, himself Ukrainian, that is, not Vladimir Lenin), was dealt a death blow in a farcical coup by old, fearful, and dull Communist apparatchiks.

In the aftermath of the debacle, Yeltsin took the lead among the heads of the three key Slavic Soviet republics – Russia, Ukraine, and Belarus – to finish off what was left of the Union. Kiev’s independence was a result of both rot and collapse at the imperial core in Moscow and national mobilization on the ground.

It’s not unusual that, in Ukraine, such subtleties of history-as-it-really-happens – rudely mixing up the opportunistic and the visionary, the seemingly preordained and the obviously contingent – are not at the forefront of public celebrations: Unfortunately, national narratives abhor nuances, almost always, almost everywhere.

Ukraine’s Independence Day, thus, features traditional national symbolism. There will be, for instance, a military parade, breathlessly announced as a “second Christmas for all defense geeks” by one journalist; the information agency Ukrinform offers a sample of patriotic rhyme, including a middling pre-World War I poet’s admonition not “to serve the Liakh (a less-than-kind term for Pole) or the Moscovite;” and a grand live concert featuring Ukraine’s pop music elite will be broadcast to the whole country.

But this Independence Day has also produced much commentary and reflection seeking to assess Ukraine’s post-Soviet decades. One outcome of this genre is a major poll under the title “Generation of Independence: Values and Motivations,” carried out by the Kiev-based NGO Rating.

The project has annoying weaknesses: There is some boosterist rhetoric that reads like a national pep talk or sales prospect for international investors. We learn, for instance, that the “young who… have grown up in the new conditions of the global world… are now setting new trends… breaking stereotypes and traditions, and forming new demands…”

Based on a national sample of 20,000 respondents, the project seems suffused by a naively neoliberal attitude in search of its ideal post-Soviet new man (and woman): young, mobile, positive, ambitious, and industrious; pleasantly progressive in lifestyle while perfectly adjusted to capitalism in politics and work ethic. Or to be precise, the project seems in search of an ideal neoliberal and national subject. As the introduction underlines, this “generation of independence” applies its optimism and confidence to Ukraine as well. “Because” thunders the commentary in bold type, “they are Ukraine and its future.”

In a similar vein, Rating oddly asserts that there are, in essence, two kinds of Ukrainians: those who “are proud of the country and happy about themselves” (mostly young) and those “who are personally depressed and project their negative emotions onto Ukraine” (mostly old). That’s a crude, methodologically unsound sleight of hand, which we could rephrase as “if you’re content with Ukraine, Ukraine deserves it; but if you are not content with Ukraine, then it’s really your own misery that is to blame.”

The poll results are also unhelpful when it comes to the economic self-assessment of Ukrainians: the scale system adopted won’t reveal an important fact that we know from data regularly collected by the state statistics office, namely that a majority of Ukrainians now see themselves as “poor” and only a minority as even “middle class.”

Yet, to be fair, few things come without an agenda, and a transparent one has the advantage of a certain honesty. There can be no doubt that this is an important project that has produced much valuable data which will keep commentators and researchers busy for a while yet.

To pick out just a few highlights: We learn something we also know from other polls. Ukrainians do not regret independence. In fact, there is a preponderant majority in its favor, now as in 1991. Moreover, the younger, the fewer the doubts about it. Among those between 16 and 30 years of age, as many as 88% would vote for independence now. Among those over 61, there still is a clear majority, but a slightly smaller one of 70% – far fewer than voted for it in 1991.

The well-known regional distinctions still exist, with Ukraine’s west much more pro-independence than parts of the east and southeast. Independence, however, commands an absolute majority everywhere; any differences are only a matter of the size of that majority. The poll did not include, it should be noted, Crimea or the separatist areas in eastern Ukraine.

What is more intriguing than regional variations, are those by income: Ukrainians classified as “well-provided-for” are significantly more pro-independence than those categorized as “poor” (87% versus 66%). Clearly, some feel they have done well out of independence, while others may think that their more reduced circumstances may be partially down to the move.

The poll also offers rich data on the self-identification of Ukrainians. The upshot is that seeing yourself as a “citizen of Ukraine” is, unsurprisingly, a very widely held view; seeing yourself as a “European” is a standpoint that also matters but significantly less so, and as a “Soviet person” much less again. Regional, age, wealth/income, and education differences follow a pattern. Very roughly put, the further west, the younger, the more educated, and/or the wealthier, the more identification as “European.” The further east, the older, the poorer, and/or less educated, the more resonance for the category “Soviet person.”

In the area of “values,” Rating praises its respondents for their “universalism” and “kindness” (categorized as “socially desirable”). But their orientation toward “conformism” and “safety” gets a cold welcome, as part of a “vector of conservatism,” quickly blamed, however, on war and the pandemic. Regarding “the level of tolerance toward certain groups,” the pollster delicately finds some “contradiction” between respondents’ “desired self-assessment and the perception of reality.” That piece of muddle really seems to mean that respondents tend to see themselves as more tolerant than they actually are.

On the whole, there is much intolerance toward those who are open about not believing in God, don’t want children, or are LBGT – 28%, 42%, and 47% respectively declare a negative attitude toward these categories. Age makes a difference: Regarding LGBT, 65% of those over 61 feel negatively, but only 23% of those between 16 and 24.

Interestingly, regional differences do not follow a simple east-west pattern. The west of Ukraine is much more intolerant toward non-believers than the civil-war-wracked Donbass region in the east. Concerning LGBT, however, both the west and east are highly intolerant, while the middle of the country and the capital Kiev are more laissez faire. A similar pattern prevails, if less pronounced, with regard to those who don’t want children. Education does what you’d expect it to do: on the whole, the more educated, the more tolerant. Yet even among respondents with higher education, roughly a third still state a negative attitude toward both LGBT and the intentionally childless.

Another striking result with regard to values that has already triggered much comment is that 51% of respondents are in favor of re-introducing the death penalty. And again, both west and east are in favor, while Kiev is less so. Here, however, the region of Galicia, the part of the west that used to belong to the Austrian Empire until World War I, is aligned with the capital in its high levels of opposition. Age matters too: the younger you are, the less likely you want to put criminals to death.

Re-introducing the death penalty would contradict the desire of many, though by no means all, Ukrainians to fully join the European Union. The Rating poll provides insight here as well – asked what foreign policy orientation they consider best, half of the respondents answer “toward Europe,” which will please those in the West thinking the same. And yet they should be careful. Another 35% want equidistance between “Europe” and “Russia.” Add the 9% who openly state they prefer Russia (considering the circumstances, not everyone who thinks so may be willing to say that to a stranger), and you have 44% of Ukrainians who clearly declare an orientation that is incompatible with prioritizing “Europe,” or rather, the EU.

The upshot is that, even if the future may look different again, there is no absolute majority for making “Europe” the key target of Ukraine’s ambitions. And while there is a very slim relative majority, almost the same number of Ukrainians are explicitly against such a policy. Nota bene: not just sitting on the fence. And that, after several years of conflict with Russia and massive support by the EU. Keep that in mind, please, next time an “Atlanticist” think tanker in Washington or Berlin tries to sell you the idea that most Ukrainians want to go West.