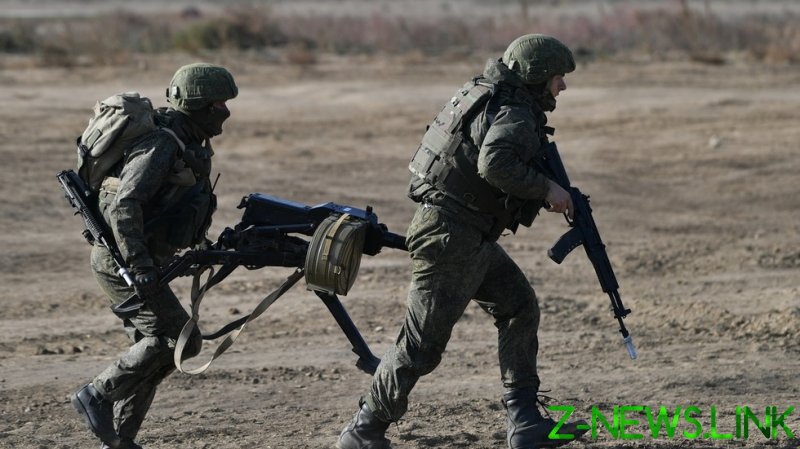 Dmitry Kuleba sounded the alarm on Monday during a meeting with his Western counterparts, saying that the West would have to avoid being tied up in bureaucracy in the event of a conflict. “If Russia starts acting, you simply won’t have time physically to coordinate, to go through all the bureaucratic procedures, to coordinate decisions,” he said.

“So please do the preparatory work now, because if the military scenario happens, there will simply be no time,” he urged his French and German counterparts, Jean-Yves Le Drian and Heiko Maas.

The foreign minister insisted that Kiev, however, is not looking to escalate the situation, but will defend itself if necessary.

Kuleba’s demands for Paris and Berlin to begin military preparations coincides with claims from NATO head Jens Stoltenberg, who said that the organization has seen an “unusual concentration of troops” on the border with Russia.

On the same day, Ukraine’s State Border Service, however, rebuked claims that Moscow’s forces are amassing there. A spokesman for the organization told Ukraine-24 TV that it does not “register any movement of equipment or military of our neighboring country near the border.” According to him, if there is indeed any action occurring, “it may be dozens or even hundreds of kilometres from the state border.”

The Kremlin has denied reports circulating in Western media earlier this month that Russia may be plotting an invasion. Spokesman Dmitry Peskov stated: “We have repeatedly said that the movement of our armed forces on our own territory should be of no concern to anyone. Russia poses no threat to anyone.”

READ MORE: Kremlin responds to Western claims that Russian troops are ‘massing’ on border with Ukraine

US news site POLITICO drew fire earlier this month for reports that claimed Russian forces were stepping up their presence near the border with Ukraine. Satellite images published alongside the article claimed to show Russian hardware near the city of Yelnya, around 250 kilometers from Ukraine, and closer to neighboring Belarus.