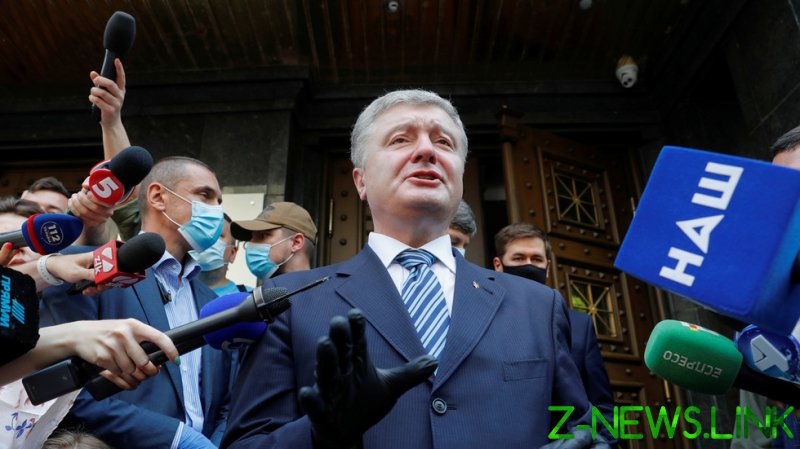 The case is ostensibly linked to the coal trade between Kiev and the breakaway eastern Ukrainian regions in the Donbass during his time in office. Poroshenko, who heads the European Solidarity party, was a vehement opponent of both the unrecognized statelets and Russia.

Earlier this year, another Ukrainian opposition leader, Viktor Medvedchuk was placed under arrest, allegedly for committing treason in dealings with Crimea. Just like Poroshenko, Medvedchuk’s Opposition Platform – For Life had polled ahead of Zelensky’s faction before he was prosecuted.

Medvedchuk has claimed the case against him is clearly politically motivated.

“The fifth President of Ukraine … was informed about the suspicion of high treason and facilitating the activities of terrorist organizations,” Ukraine’s State Bureau of Investigations (DBR) said in a statement on Monday.

Poroshenko left Ukraine on Friday, with his party stating that he was heading for a pre-scheduled visit to Turkey and Poland. Shortly before his departure, the DBR tried to hand him a notice, summoning him for questioning. The ex-president, however, “ignored the representatives of the law enforcement agency and left in an unknown direction,” the DBR said.

The ex-president is suspected of being a part of a conspiracy to purchase coal from the breakaway republics Donetsk and Lugansk, with the estimated worth of goods traded amounting to some 1.5 billion hryvnias (nearly $55 million). The conspiracy allegedly included unspecified “representatives of the top leadership of the Russian Federation,” the DBR claimed.

Since the breakaway republics are regarded as ‘terrorist organizations’ by Kiev, the ex-president is facing charges ranging from terrorism support and financing to high treason. If convicted on such charges, Poroshenko might face up to 15 years behind bars.The notice of suspicion was supplied to the ex-president in accordance with the country’s standing criminal procedure code, the DBR said.

The ex-president has also been summoned for questioning, scheduled for Thursday, his attorney Ilya Novikov revealed on Monday. The lawyer, who published the text of the notice in a Facebook post, has cast doubts on the legality of its delivery procedure.

Novikov alleged that the notice was deliberately delivered while Poroshenko was abroad, so that media outlets “close to the administration” of President Volodymyr Zelensky could claim the ex-leader fled the investigation and aimed to hide from it in other countries.

“A delegation from the prosecutor’s office came to the house of Petro Poroshenko, asked the security guard if the fifth president was home (he is at a conference in Warsaw, and it’s unlikely they didn’t know it) and slipped the notice into an opening in the gate,” Novikov said.

The lawyer accused the prosecutors of “giving in” to pressure from the current Ukrainian administration and acting as part of the alleged smear campaign against his clients. The attorney has not, however, revealed when – or if – Poroshenko will return back home.