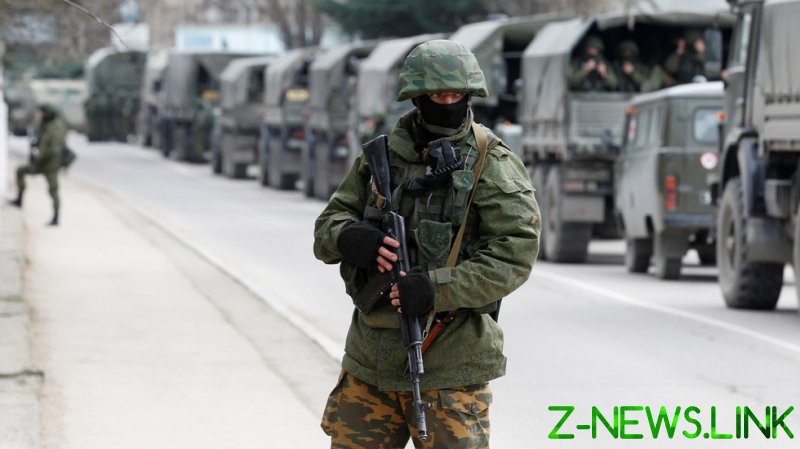 Speaking to lawmakers on Friday, Denis Monastirsky requested around $640 million be allocated for engineering equipment on the frontiers with Russia and Belarus, which span a whopping 1,974 and 1,084 kilometers (1,226 and 673.5 miles) respectively.

According to the official, Kiev’s updated demarcation line cannot be just a concrete wall with towers, but an “intelligent” complex of barbed wire barriers and fencing, alarm systems, unmanned aerial apparatuses, and 24-hour surveillance.

He went on to add that “the Verkhovna Rada [parliament] needs to be ready to consider the introduction of a state of emergency in the border areas or its regions if it deems necessary,” as Poland and Lithuania have done in response to a sharp rise in illegal migrants. However, he said, “there is no such need yet.”

“In the event of aggressive actions from border violators, the use of the necessary special means and weapons is being made available,” Monastirsky continued. “We understand that in case of a threat to the life and health of border guards and law enforcement officers, we will use all the necessary means provided by law, including firearms.”

The ongoing migrant crisis unfolding on the EU’s eastern borders has escalated in the last two weeks as thousands of desperate people, largely from countries such as Iraq, Iran, and Syria, have attempted to enter Poland and Lithuania via Belarus.

However, attention has also turned to Kiev in the midst of the worsening situation, with US Secretary of State Antony Blinken claiming that Minsk’s actions “threaten security, sow division, and aim to distract from Russia’s activities on the border with Ukraine.”

Moscow has repeatedly insisted that it is not involved in the worsening humanitarian situation amidst accusations from Western politicians and talking heads that Belarus and Russia are waging a “hybrid war.”

Earlier this month, Kremlin Spokesman Dmitry Peskov blasted rumors of a Russian military build-up near the borders with Ukraine and said that the country “poses no danger to anyone.”