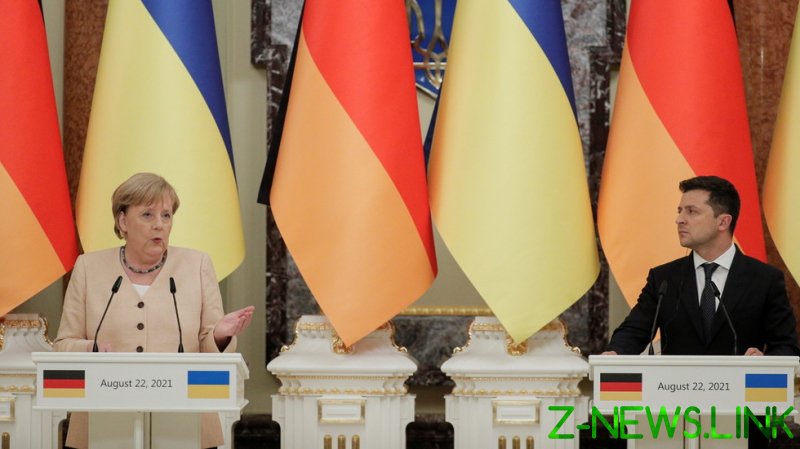 The veteran outgoing leader, who was visiting Ukraine, on Sunday, two days after talks with her Russian President Vladimir Putin in Moscow, met with Ukrainian President Volodymyr Zelensky in Kiev. Zelensky praised, what he called, Merkel’s longstanding support of his country and awarded her the Order of Liberty, the country’s highest merit that can be given to foreign nationals. Among the recipients of the Order are US President Joe Biden, the late Senator John McCain and Hungarian billionaire George Soros.

“In any case, in any status and at any time you will remain a welcomed guest in Ukraine,” Zelensky said, expressing hopes that Merkel will keep herself politically active even after the impending end of her term.

With the Nord Stream 2 gas pipeline nearing completion and despite loud objections from Kiev and Washington, Merkel’s visit was bound to revolve around Russia.

The issue of gas transit through Ukraine was a centerpiece of the meeting. Merkel largely repeated her earlier promises to keep Russia in check in terms of “abusing” the Baltic Sea pipeline – which bypasses Ukraine – and reiterated her call to extend the transit of Russian gas through Ukraine past 2024, when the current contract is set to expire. At the same time, she urged Kiev to get “ready” for a time when Europe ultimately shifts towards other sources of energy.

“In 25 years at the latest, gas will not be exported from Russia to [the rest of] Europe at all, or in much smaller volumes. Ukraine must be ready for it, that [the] Europe[an Union] will be significantly more independent from gas,” Merkel said, adding that dependence on the resource might eventually be replaced by cooperation on hydrogen.

Merkel discussed gas transit with Putin on Friday, with the Russian leader unambiguously stating that Moscow will abide by its obligations, and signaling it was ready to prolong the deal beyond 2024.

At the same time, Putin said the issue was “purely commercial,” and the new Nord Stream 2 pipeline, expected to come onstream soon, beats the aged trans-Ukrainian pipeline system by all meaures. The new option is some 2,000 kilometers shorter, and is built to modern ecological standards, he said.

Zelensky on Sunday said that he refuses to view the Nord Stream 2 project as commercial. “I believe that it’s not right to not notice that [the pipeline] is a weapon,” Zelensky said, as he spoke at a joint press conference alongside Merkel. The Ukrainian leader urged more clarity on the prospects of gas transit through the country beyond 2024 which he described as “vague.”

While it remained unclear what conditions would qualify the pipeline as a “weapon,” Merkel assured Zelensky that Russia would be subjected to a new round of sanctions if that were to become the case.

Actual weaponry was also on the table during the talks, with Zelensky urging Germany as well as other Western countries to come up with more material help instead of words of support.

“We’ve reached [out to] the German government about arms supply and received refusals in one form or another. And I really would like to, and we really are working… within the framework of NATO exercises. Indeed, both Europe and Germany support us. However, we need very concrete things,” Zelensky said.

One of Ukraine’s priorities in the military field is the creation of a “mighty fleet like it used to be 30 years ago,” Zelensky explained. According to the politician, the Ukrainian Navy should be upgraded by 2035.

“We need it to de-blockade the Black Sea and Azov Sea regions,” Zelensky also insisted.

Ukraine did receive a large chunk of the Soviet fleet, after it became independent, in 1991. However, the assets fell into disrepair over the years, with multiple out-of-order vessels, including Ukraine’s only submarine, ending up in Russia’s hands after the 2014 reunification with Crimea. At the time, much of Kiev’s navy defected to Moscow’s side.