Home / policy / Ukraine is still not tired to be independent

Ukraine is still not tired to be independent 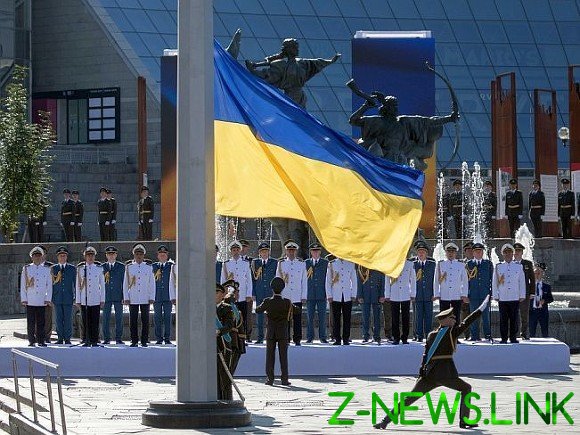 Day Nezalezhnosti in Kiev was a success. Although it was without tanks and slogans of the struggle against the “aggressor.” But Zelensky has urged citizens not to fight over the past.

— The parade will go to the independence Day? — asked kiyani each other on the eve of a long weekend.

So Zelensky canceled?! Like, the money the military apartments were going to buy.

— Wanted, who will give him now for the second parade will be. It is true that both still — without tanks.

Vladimir Zelensky from the first steps of his presidential tries to demonstrate a departure from the pomp and reminds us that there is a more appropriate target for spending money from the Treasury. While on the bike, of course, work doesn’t drive like it Tegeler from the TV series “servant of the people”. 9 July, he said that instead of the parade on the independence Day of Ukraine, the government allocates UAH 300 million for the payment of awards to servicemen for the promotion and purchase of housing for the needy. And anyway, I offered to do a modest festivities in the fresh air. In response rose a howling from opponents of the new government that does not respond has become impossible. Almost the first protested Poroshenko, however, other political forces, “offended” electoral choice of the Ukrainians supported the former President.

By the way, about the apartment soon stopped talking. The military promised a prize in the amount of 1-2 thousand hryvnia. But in the end a military parade on this day, all has not carried — for the first time in 2014. At the center of the Ukrainian capital on Saturday, there was no military equipment, and two Hiking columns — both for the “happiness of Ukraine” and against her enemies, but each with its own understanding of how to go to a brighter future. The first, organized by the office (administration) of the President, called “March of dignity”. It was headed by the Vladimir Zelensky and his wife. The second, popularly known as the “March of nationalists” and organized in defiance of the new government, was supposed to lead to Poroshenko, but somehow at the last moment changed his mind. Apparently decided not to run into the negative attitude of the ATO veterans and nationalists.

On “ze parade” chose white clothing, emphasizing the peacefulness of Ukrainian politics and a desire to end the war quickly. They say, we are fighting, but forced. Zelensky, though, and retains much of the pathos of its predecessor, but managed in that his speech directly to avoid words like “occupation” and “aggression”. “We are different. But we are United. Must be United, because only then we are strong. Should understand that can count only on themselves. Not to fight over the past and unite for the future. Ukrainian and Russian speakers, regardless of age, gender, religion — to be a United nation,” the President said.

Radicals, hungry for revenge and blood, of course, full camo, rattled medals, moved to March in Shevchenko Park. Despite ideological disagreements, the conflicts between radicals and moderates was avoided. The patriots are not particularly rowdy, limiting chants about Putin.

And still: what for Ukrainians independence Day today? Is there any disappointment in made 28 years ago choice or pride? Probably every resident of the country involved in the selection, asked that question and honestly trying to answer it yourself, or at least to sociologists. According to one recent survey, 82% of citizens would support the proclamation of independence of Ukraine, if they had to make such a choice today, and only 12% would oppose. However, in 1991 for “freedom” voted, incidentally, more than 90% of participants in the referendum and, by the way, 54% of the Crimean people and the vast majority of inhabitants of Donbass.

But two years before the independence square of Ukraine were ready to support only 62% of the citizens. Where added another 20? The answer to the long search is not necessary. Most of Ukrainians believe that Russia has betrayed the fraternal relations, encroaching on the territorial integrity of the state. Incidentally, in the East of Ukraine for independence today expressed 69% of the respondents. Yes, of course, if you ask anyone who lives in the “independent” part of the Donbass, the figures for this region would be different, but the “Ukrainian” half of the year, it does not say, opinion is.

If to speak about the events in Kiev they just gone to glory. The picture of “national unity” happened. However, provincials, one eye watching both the capital of the procession on TV, the rise of feelings and the manifestation of civic engagement might seem excessive. In the Outback even a “conscious” use of additional time on a weekend for the soul and body, lounging on the beach with a beer or digging in the garden of the Villa. The obligation remained for the servants of the public sector — they are supposed to. Here they are the veterans of the ATO in the ground and hung out at numerous official events, waving flags and singing the Ukrainian national anthem — very beautiful, by the way.

But a moment of silence, a memorial prayer, the celebration of national symbols — the entire standard set was observed. Military parades are not resolved no one, however, soldiers were paid special attention. In Lviv was marked “March of the unconquered,” and a demonstration of armor and weapons. In Odessa held a “Vyshivankovy festival” on the Potemkin stairs to the sounds of military bands. However, compared with the capital, the occasion was “not the same”.

In General, if we analyze the results of the polls and the General mood of the masses, it turns out: if I had to repeat all over again, certainly, the Ukrainians chose independence, but would build it a different way — that all somehow turned out clumsy. Both domestically and in relations with the rest of the world.