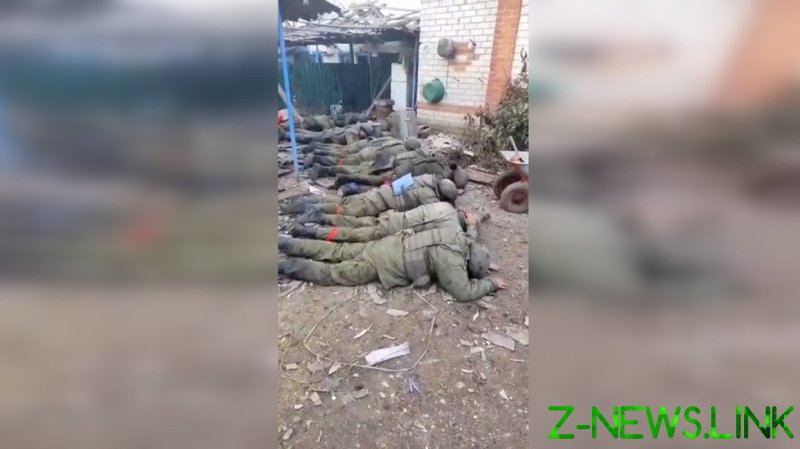 A “barbarous killing of Russian prisoners of war” is just the latest in a series of war crimes committed by Ukrainian troops, Russia’s Defense Ministry said on Friday. The statement came after videos that surfaced online purportedly showed executed Russian servicemen after they surrendered.

“This is a widespread practice of the Ukrainian Armed Forces that is actively supported by the Kiev regime and outright ignored by its Western backers,” the ministry stressed. It also blasted the actions of the Ukrainian soldiers as a “deliberate and methodical murder.”

“No one will be able to portray it as a ‘tragic exception’ amid the Kiev regime’s alleged total compliance with the norms regulating the rights of POWs,” the statement reads.

The footage allegedly shows a group of soldiers dressed in Russian uniforms surrendering to troops in uniforms with Ukrainian insignia. It also depicts the captured servicemen lying on the ground, presumably dead.

The video demonstrates the “barbaric nature” of President Vladimir Zelensky’s regime, as well as of its backers, the Russian Defense Ministry asserted.

This is not the first such high-profile incident supposedly involving Russian and Ukrainian troops that has generated media attention. In March, another video surfaced on social media purportedly showing Ukrainian troops shooting at the legs of Russian soldiers lying on the ground at point-blank range.

Later the same month, footage allegedly showed the killing of a wounded Russian soldier lying on a road somewhere in Ukraine. Bodies of other soldiers dressed in Russian uniforms and lying in pools of blood were also visible in the video. Some of them had their hands tied behind their backs and no weapons were visible on any of them.