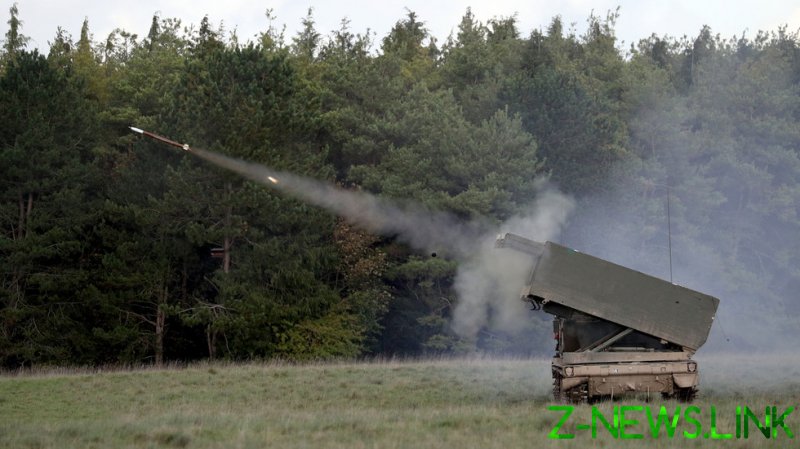 While Reznikov did not elaborate on who exactly supplied the US-made system, as he extended his gratitude generally to Ukraine’s “partners,” Britain had previously pledged to deliver at least three systems like this to Kiev’s forces.

The US-made M270 MLRS system is, effectively, an older cousin of М142 launchers, which had previously been supplied to the Ukrainian military by Washington. While the tracked system is less mobile than truck-based HIMARS, M270 packs twice the punch, featuring 12 tubes to launch 227 mm missiles against six.

It was not immediately clear whether the new M270 launchers had already gotten to the frontline or not. The M270 HIMARS system was deployed by Kiev to the battlefield in late June. While Ukrainian officials insist the systems have been used to target “warehouses with weapons and stocks of fuel and lubricants” used by the Russian military, Moscow and Donbass authorities accused Kiev of using the weapons to shell civilian areas.

Speaking at a media briefing on Thursday, Russian Foreign Ministry spokeswoman Maria Zakharova said that Kiev forces had been using “US-supplied multiple-launch rocket systems HIMARS on all fronts” as of late. The military “has apparently been ordered by Kiev to use the said launchers against civilians without any hesitation,” she claimed, while accusing Washington of sharing intelligence on targets with Ukraine.

Moscow has repeatedly warned the West against “pumping” Ukraine with weapons, insisting that such aid would only prolong the conflict and inflict further damage on the Ukrainian people rather than change its ultimate outcome.