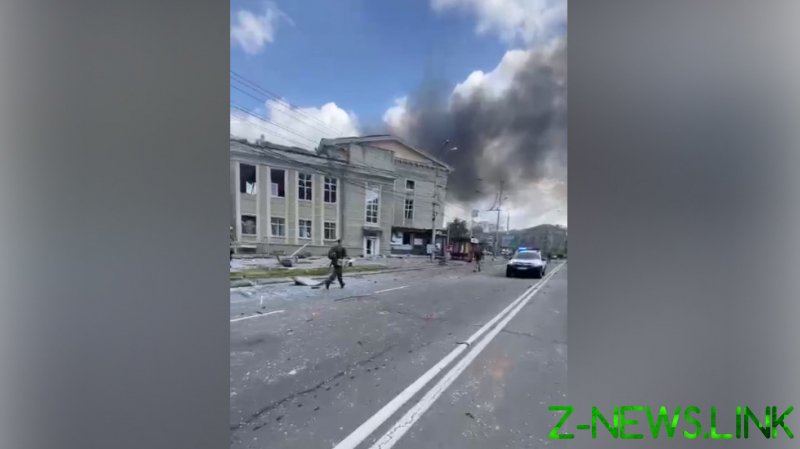 An alleged Russian missile attack hit the center of the Ukrainian city of Vinnitsa on Thursday, the local authorities said. The latest casualty report by the emergency services said 20 people were killed, including three children, and 52 others were injured.

Multiple images purporting to show the aftermath of the incident show charred, heavily damaged vehicles, buildings with shattered windows, and other evidence of a powerful blast. There were also small fires in the area, photos and videos show.

The incident happened on Thursday morning as the Ukrainian air defenses shot down four other missiles over the city, according to Sergey Borzov, the head of the Vinnitsa Region administration. City police said a total of three projectiles hit the downtown.

Ukrainian media claimed that the weapons hit an office building. Reports said they also damaged nearby residential buildings and the building of the House of Military Officers, an institution operated by the Ukrainian Defense Ministry, which normally serves as a concert hall.

The Russian military would not immediately comment on the incident. RT Editor-in-Chief Margarita Simonyan cited a Russian defense official as confirming the attack and saying that the House was the intended target. Ukraine used it as a temporary shelter for its “Nazi” fighters, the source claimed.

Ukrainian President Volodymyr Zelensky decried the incident as the latest atrocity allegedly committed by Russia, claiming on social media that that Russian troops targeted civilians on purpose. The Ukrainian leader has also accused Russia of waging a genocidal war against his nation, while Moscow insists it only uses force against legitimate military targets.

Vinnitsa is the capital of the region of the same name, and is located in central Ukraine around 190km southwest of Kiev.