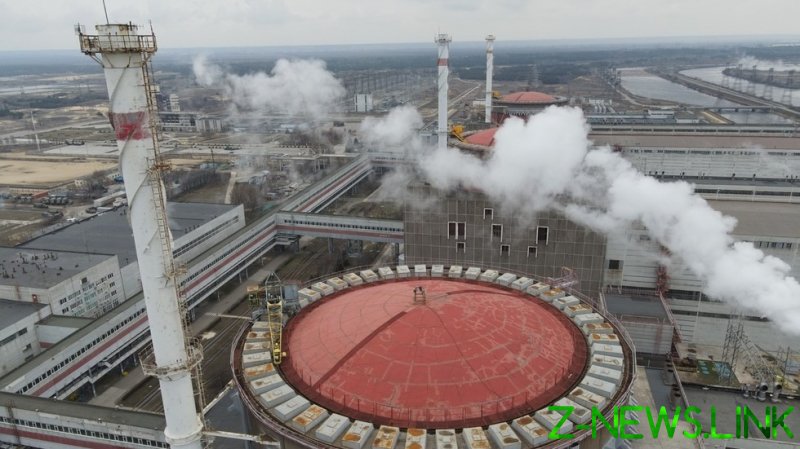 “One of the guided missiles hit just 10 meters” from the barrels with spent nuclear fuel,” Rogov told Soloviev Live. “Others hit a bit farther away, 50 to 200 meters.”

Since the storage site is out in the open, any hit will result in the release of nuclear waste ranging from dozens to hundreds of kilograms and contamination of the area, the official explained. “In plain language, that would be like a dirty bomb,” said Rogov.

While the reactor itself can only be destroyed with a tactical nuclear weapon, the coolant systems and waste storage are far more vulnerable and damage to them could easily cause a disaster, the official said. Ukrainian troops have already fired “several dozen” heavy projectiles at the cooling systems, Rogov added. If they succeed in disabling such a system, it could produce a meltdown bigger than the 1986 catastrophe at Chernobyl.

Russian troops established control of the Zaporozhye NPP, Europe’s largest facility of the kind, early on in the course of military operations in Ukraine. Russia and Ukraine have been accusing each other of shelling the facility, warning that combat in the area could trigger a nuclear disaster. Russia accused Ukraine of launching artillery and drone strikes on the facility, denouncing the operations as “nuclear terrorism.” Ukrainian troops claimed that the Russians were shelling themselves to discredit Kiev.

Russian requests to the UN and the International Atomic Energy Agency (IAEA) to inspect the site firshand have been met with excuses that inspectors can only access the station via Kiev, and Ukraine can’t guarantee their safe passage.

On Monday, Rogov accused the UN of blocking the IAEA visit because it was covering for Kiev. If the inspectors actually showed up, he said, they would be forced to conclude that Ukraine and not Russia was shelling the power plant.

“It is obvious, it’s all been documented, and not only that, it’s also well known who is being supplied with American guided missiles. Obviously, not Russia, but the Zelensky regime,” he said.