Ukraine before the decisive battle with Croatia beat Kosovo 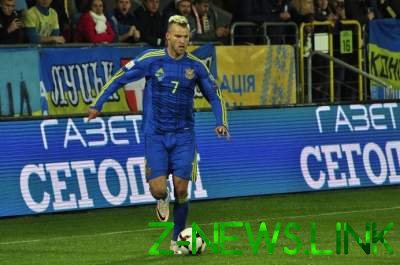 The national team of Ukraine on football in a difficult match beat Kosovo and has kept chances of an exit in final tournament of the world championship.

From the first seconds Ukraine expected took the initiative and began to positional attacks to look for weaknesses in the defense. Sharpness at the gate, the nominal owners arose solely from the left flank, where Linnet and Matvienko did not notice guardians.

The best chance to open the scoring in the match against the national team of Ukraine was on the 22nd minute a goal with a long shot shook the post and Kravets couldn’t put the ball into an empty net.

For the second half, two things happened. First, Shevchenko instead Kravets (Artem received a yellow card and he deleted himself from the list of participants of the match against Croatia) thrown into battle newcomer Marlos. Secondly, in Albania, increased rain, and although the quality of the pitch was high,
such conditions “blue-yellow” has become more difficult to look for chances in attack.

Fortunately, the Kosovars decided to help Ukraine and organized the ball into his own net on 60 minutes Pacardo flicked the ball into the net after a cross from Konoplyanka. Finally, all the questions about the winner the visitors took only two minutes – Stepanenko threw the ball to Yarmolenko, but the one from a few feet away
shot gate.

With a scratch team of Ukraine took three points from Albania and retained the chances of getting to the final stage of the world Cup. The team of Andriy Shevchenko to get into the play-offs you need any score to beat Croatia. The match will take place on 9 October in Kiev at the NSC “Olympic”

Iceland on the road defeated Turkey and made a serious bid to qualify for the world Cup. In the final round the team Hamira of Hallgrimsson enough with any score to beat the national team of Kosovo.