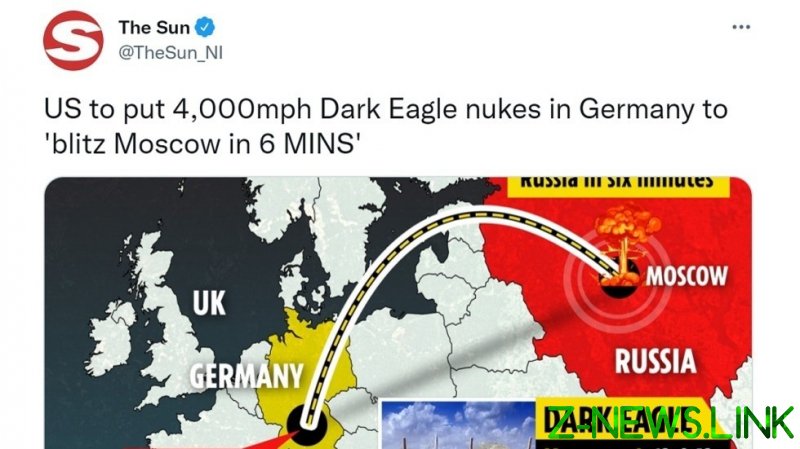 ‘Dark Eagle has landed’ proclaimed The Sun, originally reporting that the new US missiles could “blitz Russia” in just six minutes – before revising that to “21 minutes and 30 seconds” – along with a graphic showing Moscow being vaporized in a mushroom cloud.

The US has in fact reactivated the 56th Artillery Command at a ceremony in Germany earlier this week. The unit had been inactive since 1991. However, the fine print in the Sun article, as well as other British papers, notes that the command may have hypersonic missile capability when this technology is “fully developed and deployed,” supposedly sometime in 2023, according to the Pentagon.

Just a day before the 56th AC ceremony, the Pentagon announced that the very first “prototype hypersonic ground equipment” was delivered to a stateside artillery unit. A battalion of the US Army’s 1st Corps located at Joint Base Lewis-McChord in Washington state received trucks, trailers, four erector launchers and other components of the Long-Range Hypersonic Weapon (LRHW), but no missiles yet.

The name “Dark Eagle” comes from Rob Strider, the official in charge of the Army’s hypersonic project office. The missile itself is being developed by the Alabama-based Dynetics, known for the Mother of All Bombs (MOAB), the Gremlin drone, some rocket engines and IT services. The principal weapon systems integrator will be Lockheed Martin, the company behind the controversial F-35 fighter jet project.

The hypersonic missile race kicked into high gear in October, after another UK outlet reported that China had tested such a weapon in August, catching the US by surprise. Beijing officially denied the claim, saying the test involved a spaceship instead. Meanwhile, Moscow has tested its own Zircon hypersonic missile, which the Russia military says is just about ready for operational use by its naval forces.