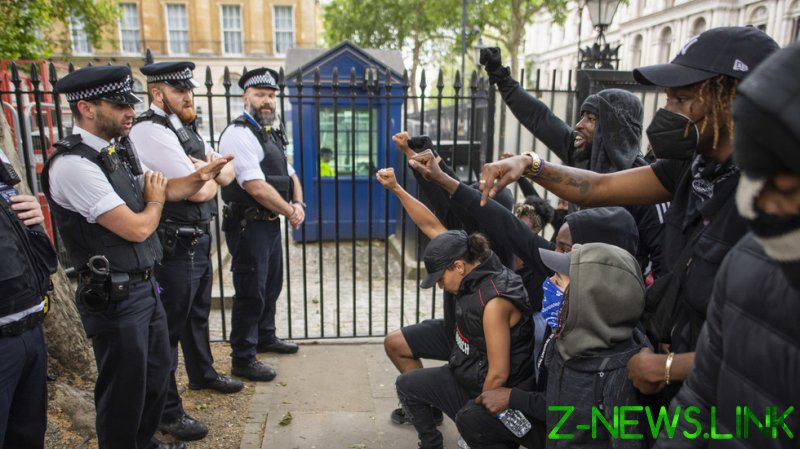 The warning from Her Majesty’s Inspectorate of Constabulary (HMIC) came in a report commissioned by the Home Secretary after 2020 saw protests from a number of groups on the streets of the UK.

The report examined how police handled the protests – including how they engaged with activists on the ground. “We inspected 10 police forces with recent experience of policing protests and consulted a wide range of other bodies, including protest groups and – through a survey of over 2000 people – the general public,” HMIC said of its research.

The watchdog recommended that officers “think very carefully before they take any actions which may be interpreted as showing support for, or aversion towards, any protest”, stating that it would “rarely be appropriate” for them to do so while at work.

The report highlighted one example where a police officer took the knee at a Black Lives Matter (BLM) protest, resulting in their colleagues facing abuse from activists around them until they were pressured into following suit.

HMIC did outline how there could be some instances where it would be understandable for officers to engage with protestors in the “spur of the moment” if it helps with “diffusing tension at a protest”, but in general said officers should not make it a habit of it so as to avoid appearing to show support or opposition for any cause.

In June 2020, footage shared on social media showed British police officers outside Downing Street joining protesters in taking a knee, a symbol of the BLM protest movement after it was done by American football player Colin Kaepernick. Similar videos of officers engaging with activists occurred in 2019 during Extinction Rebellion protests, with videos showing British cops dancing with demonstrators and even skateboarding with