UK police keep painting cars with rainbows to stamp out anti-LGBTQ bigotry… as critics wonder why no ‘anti-knife crime’ vans? 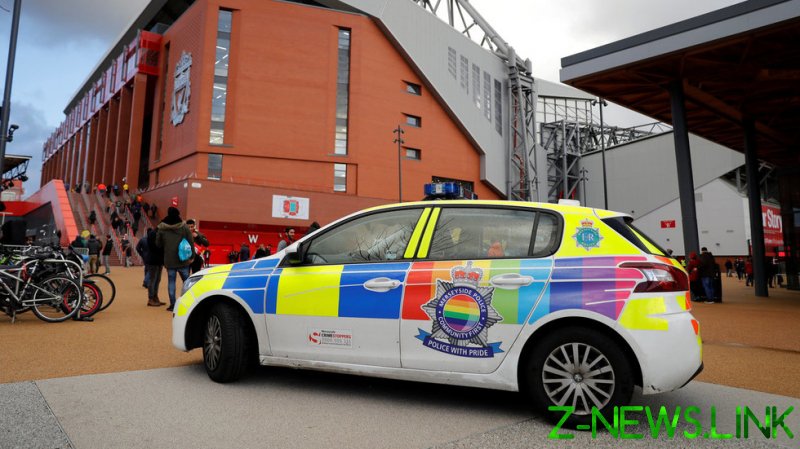 The aim of the so-called “hate crime cars” is to inspire more confidence in gay and transgender victims of mean comments that police will have a sympathetic ear. UK police promoted the Pride-themed makeovers in an Instagram post earlier this month, asking followers whether they had seen such cars or knew why they existed.

“Cars are there in the communities on normal policing patrol just to show the community that we want you to come forward,” chief constable Julie Cooke said. “It is there to try and give confidence to our LGBT+ community, but also to other underrepresented groups.”

Knife crime in England and Wales rose to the highest on record in the 12 months through March 2020. In this year’s first seven months, 22 teenagers were murdered in London, up from 14 in all of 2020.

Other observers mocked the programme, such as saying of the rainbow cars, “The circus is outside to make little woke kids happy.”

Babylon Bee editor Kyle Mann called it, “another one of our Babylon Bee prophecies fulfilled,” putting news of the new police cars alongside a satirical 2020 article headlined, “Democrats propose replacing all police with traveling bands of hippies singing ‘Imagine.’”

Former police officer Harry Miller told the Telegraph on Sunday that while the rainbow cars may signal support for gay and transgender people, they also show “political leanings.” He added, “You no longer see a police car or a police officer who is there to support everyone, from all political persuasions, without fear or favour.”

It’s unclear how many police cars will get the new paint job or how much the makeovers will cost, but this is not the first time that UK police have dabbled in Pride-themed cars. Sussex Police were criticized in 2017 for spending 750 pounds to paint two patrol cars for a Pride parade, even as the department struggled with budget cuts. Across the UK, police reportedly spent at least 90,000 pounds on Pride-themed merchandise, such as lanyards and T-shirts, from January 2017 to July 2020. Manchester police deployed one patrol car with a Pride-themed flag in 2014 to encourage reporting of hate crimes. That vehicle even had flashing lights of different colors and was used to lead the city’s Pride parade in 2014.