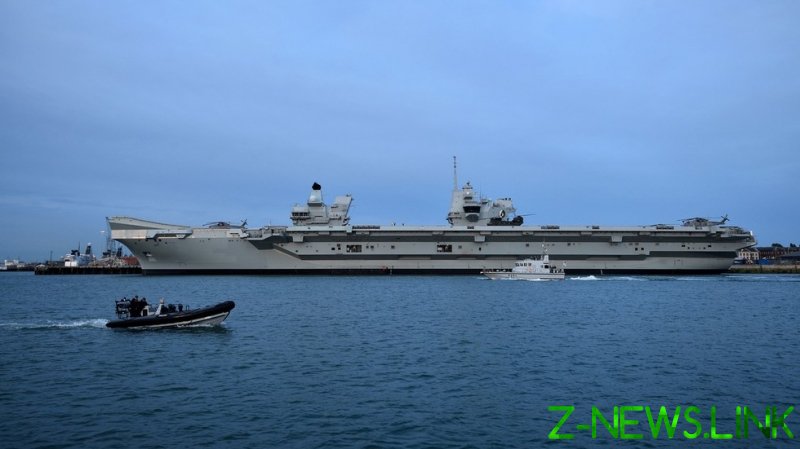 The outbreak was confirmed by the UK’s Ministry of Defence on Monday. Several crew members have tested positive for the Covid-19, while another 100 personnel of the 1,000-strong crew have reportedly been sent into quarantine onboard.

“A small number of HMS Queen Elizabeth’s personnel have tested positive for Covid during routine preparation for sailing,” a Royal Navy spokesperson stated. “The crew will continue to follow appropriate health guidelines and the HMS Queen Elizabeth will depart once their status has been confirmed.”

Sick crewmembers have been removed from the ship and are currently receiving treatment ashore. The vessel was set to leave Portsmouth Naval Base and head for training exercises on Monday, but the departure was delayed at the last moment.

It’s the second time the dreaded disease has broken out aboard the UK’s flagship. Back in April, two sailors tested positive for the virus, jeopardizing the ship’s schedule and delaying its sailing. The £3 billion warship is expected to become fully operational later this year and set sail for its first operational deployment early in 2021.

The Royal Navy has managed to avoid major coronavirus outbreaks abroad, unlike other nations that had their warships put out of service for long periods of time by the deadly illness.

France, for instance, endured a major outbreak in the battle group of its own flagship, the Charles de Gaulle aircraft carrier, in April. Back then, the group was forced to return into port after dozens of sailors tested positive for the virus and, ultimately, half of the flotilla’s personnel contracted the disease.

The US Navy has registered a string of outbreaks on board its vessels since the pandemic began, including nuclear-powered aircraft carriers. Arguably the largest – and most scandalous – occurred on board of USS Theodore Roosevelt late in March. The outbreak put the vessel out of service for well over a month, and led to the downfall of then-Acting Secretary of the Navy Thomas Modly, who was quick to relieve the ship’s Captain Brett Crozier after he went public with the alarming health situation on board the carrier.