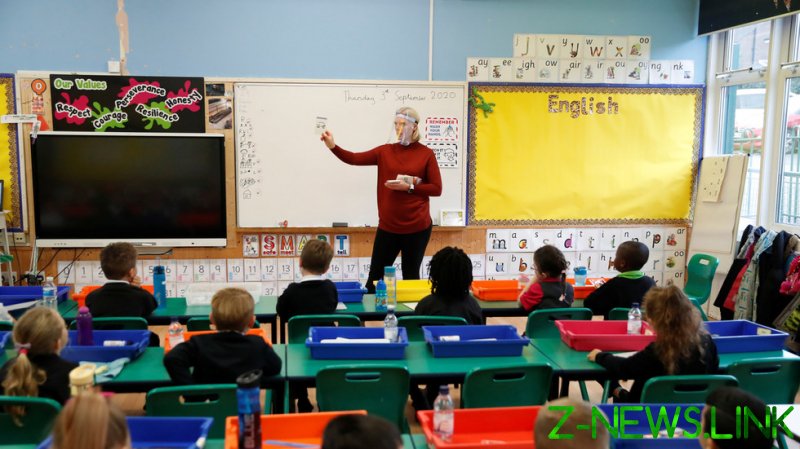 Prime Minister Boris Johnson will launch a four-year “emergency” plan to tackle the looming illiteracy crisis, the Times reported on Sunday. The problem appears to be so dire it has become the prime minister’s second top priority after the vaccination campaign, and will remain the government’s focus until at least the next election, according to senior government sources and internal data seen by the paper.

A series of lockdowns implemented in the UK in a bid to stem the spread of the disease apparently took its toll on the nation’s education, as more than 200,000 children who are about to move from primary to secondary schools are facing reading challenges. According to the government figures, the number of students struggling with reading has risen by at least 30,000 over the past year.

A report by the children’s commissioner, Dame Rachel de Souza, showed that on average each student lost roughly 19 weeks of in-person schooling over the course of the pandemic until March 8. “We asked children to make a huge sacrifice to help control the virus and now we need to give them something back,” de Souza said as she called for a “supercharged educational catch-up.”

Johnson himself already expressed his concerns over the growing education crisis during a press conference on March 23. “It’s the loss of learning for so many children and young people that’s the thing we’ve got to focus on now as a society,” he said at that time. The prime minister also called education his “legacy issue” and vowed to make some “amends.”

It is unclear when the government will officially present its plan on dealing with this issue, but the Times sources said that Johnson will deliver what they called a “blunt” assessment of the social impact of the pandemic in May. His address is expected at some point after the Queen’s speech at the opening of parliament on May 11.

The UK ‘education recovery’ czar, Sir Kevan Collins, is currently looking for a remedy to save the nation from the looming crisis. Collins is leading the review of the effect Covid-19 had on schoolchildren, and his plan reportedly involves deploying a “citizens’ army” of substitute and former teachers, as well as university students to help children catch up with their peers.

The UK government is reportedly prepared to spend “billions” on small group tutoring as well as after-school and holiday clubs, which would essentially mean extending the learning hours.

Education Secretary Gavin Williamson also said on Saturday that British teachers would need to undergo extra training to help children catch up with the months of lessons they had lost. The catch-up plan would likely involve an ‘opportunity’ for teachers to earn more by working longer hours, but the government does not plan to force them to do it.

The government already poured £1 billion ($ 1.38 billion) into a catch-up fund in June 2020 to pay for extra tutoring, but it turned out the aid was not reaching the most disadvantaged families. The campaign was also criticized for the extensive focus on private tutoring and online lessons instead of hiring additional teachers.

The new initiative also met some resentment, with Patrick Roach, the general secretary of the NASUWT – the UK’s largest teaching union – urging the government to hire more education specialists instead of increasing the burden on those, who already work.

“Our members must not be coerced into working longer hours or delivering summer schools in order to deliver on the government’s short-term fixes,” he said. “Instead, we want government to… come forward with a credible plan to recruit more teachers and support staff and other children’s service professionals.”