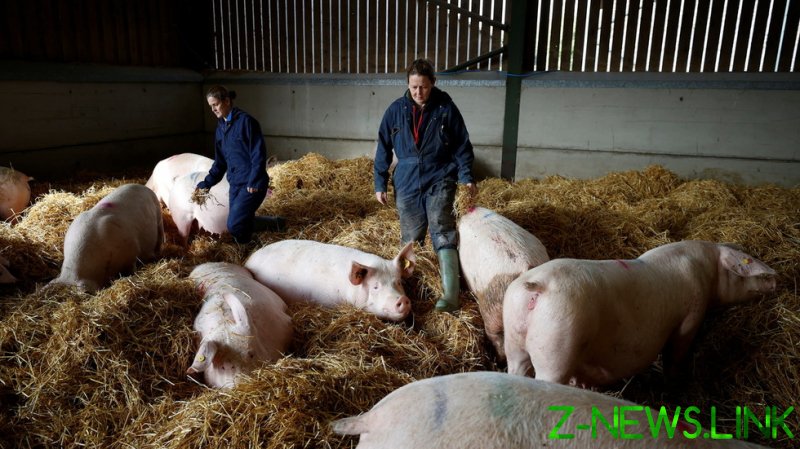 The butchers will be eligible to apply for visas from the existing allocation in the Seasonal Workers Pilot Scheme until the end of the year, the UK government said as it announced a package of measures to support the national pork industry.

The new visas will be granted in addition to an existing scheme allowing foreign butchers to apply to come to the UK through a skilled worker program created in December 2020.

“A unique range of pressures on the pig sector over recent months such as the impacts of the pandemic and its effect on export markets have led to the temporary package of measures we are announcing today,” said Environment Secretary George Eustice. He added, however, that the butchers still need to be fluent in English to successfully apply for visas.

Other measures announced by the government include setting up a fund for a private storage aid system in England to help meat processors to preserve slaughtered pigs for an additional three to six months, so that they can be processed later. The plans also involve allowing the processing of animals on Saturdays and potentially longer working hours.

The National Farming Union already called the measures a “step in the right direction,” with its vice president Tom Bradshaw urging the government to issue the visas as soon as possible. The National Pig Association (NPA) also welcomed the news, but criticized the ‘fluent English’ requirement as the “final blocker” on the way to resolving the crisis.

Earlier this week, the NPA said that some 6,000 pigs had already been culled and their carcasses incinerated, adding that up to 10,000 more would have to be destroyed per week if the backlog continued. The pork industry has warned that up to 150,000 pigs could be culled in the coming weeks as farmers struggle to find space for their livestock.

Britain has experienced a number of economic challenges as of late, with some suggesting Brexit is to blame. The UK has seen fuel shortages at petrol stations due to a lack of tanker drivers, and soaring energy prices that forced some fertiliser plants to shut down, which in turn has impacted the meat industry, creating a shortage of carbon dioxide gas used in processing.

The government, meanwhile, denied that the UK’s exit from the European Union was the main reason for the slaughter backlog. “The pig industry… has seen a loss of staff as many of the EU citizens that they relied on left during the pandemic – nothing to do with Brexit,” Eustice said.

Nonetheless, it appears that Brexit and the Covid-19 pandemic have contributed to the crisis, both helping to choke off the flow of East European workers who previously took up jobs in certain sectors, butchery and meat processing among them.

So far, the government’s efforts to reduce the labour shortage in other fields have met little success. On Wednesday, it was reported that about 300 applications had been received since officials declared earlier this month that 5,000 additional visas would be granted to lorry drivers until the end of next February. After two weeks, however, the government admitted that only about 20 applications had been fully processed, though a senior Conservative minister, Oliver Dowden, said he expected “that number to increase over time.”