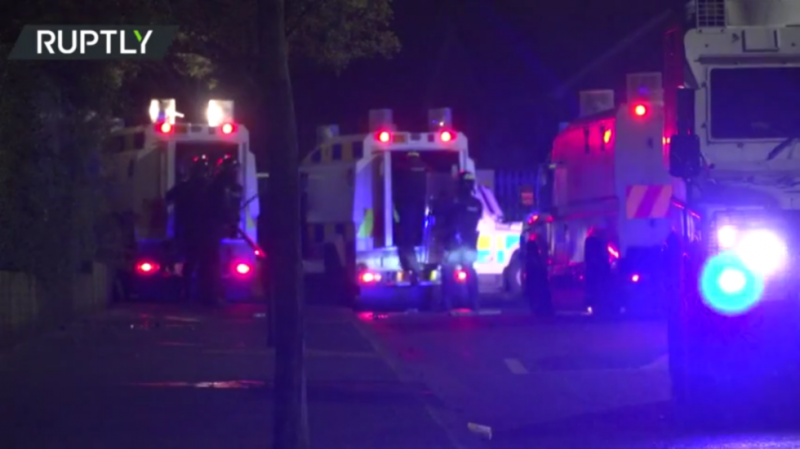 Footage from RT’s video agency Ruptly shows a fleet of police vehicles racing down a street in Northern Ireland’s capital with sirens blazing on Wednesday evening. In one clip, police in riot gear are seen gearing up as loud bangs can be heard nearby. Earlier in the day, rioters hurled petrol bombs and torched a bus. Officers who arrived at the scene were reportedly attacked with projectiles.

The unrest is believed to have been triggered by anger over the decision not to prosecute Sinn Fein members who attended the June funeral of senior IRA figure Bobby Storey. Around 2,000 mourners attended the event, seemingly running afoul of Covid-19 measures that restricted large gatherings. Tensions had already been inflamed among the loyalist community over the UK’s Brexit deal with the EU, which requires checks at ports and airports for some goods arriving from Great Britain.

At least 10 arrests have been made and more than 40 officers have been injured in clashes that have occurred since the violence broke out.

Speaking on Thursday, British Health Secretary Matt Hancock said that the scenes unfolding in Northern Ireland were concerning and called for de-escalation.

“Of course we’re concerned. The route out of this is dialogue and I’d encourage all sides to engage in that dialogue,” he said.

Irish Prime Minister Micheal Martin echoed a similar sentiment and urged “the two governments and leaders on all sides to work together to defuse tensions and restore calm.”