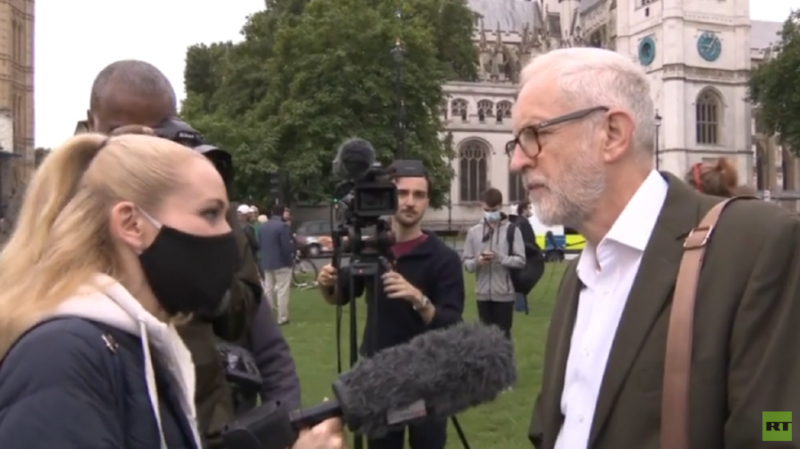 The protesters who joined a rally organized by ‘Stop The War’ coalition demanded the government recognize the war in Afghanistan as a catastrophe that should not be repeated.

“Britain, after all, was responsible for the training of the Afghan army; Britain set up an officers training corps of the Afghan army and the result was not a good one,” Corbyn said, adding that Downing Street must also explain “the chaos of evacuation.”

The politicians must show “that they can learn foreign policy lessons,” the former Labour leader said. Corbyn, however, believes that the current government can’t do anything like that. “I do not think that the government really has a plan other than Boris Johnson criticizing the US president [Joe Biden],” he said.

For now, it is even more important to focus on the “security of the people at risk in Afghanistan at the present time,” Corbyn said. Earlier, London pledged to take in a total of 20,000 refugees, including 5,000 this year. Yet, this figure pales in comparison to the “vast number” of people that are currently in dire need of help, the former Labour leader said.

The UK must agree to accept a much larger number of refugees, Corbyn said, adding that London – and the UK Home Secretary Priti Patel in particular – should drop their “anti-refugee rhetoric.” Patel was behind the toughening of the UK’s refugee policy over recent months as she vowed an overhaul of the asylum system and a new “fair but firm” approach back in March.

Most recently, she said that the UK would be unable to accommodate 20,000 people in one go as the government’s scheme of taking in refugees from Afghanistan faced criticism.

“There should not be a cap placed on [the number of new arrivals],” Corbyn said, adding that “there should be a principle: to give asylum to those that need it.”

The former Labour leader also said that he wants to see “respect for human rights and women’s rights and children’s rights in Afghanistan,” adding that this is “not a very easy” task and would likely require engagement from Afghanistan’s neighbors and some bigger powers in the region, including India, China, Russia and Iran.

Multiple protests took place outside Parliament in central London on Wednesday as hundreds of people took to the streets to demand the government admit mistakes made during the Afghanistan campaign and help as many Afghans fleeing Taliban rule as possible.

All the protests went peacefully and there were no incidents resulting in injuries or arrests, the British media reported.The developments come days after the Taliban seized the Afghan capital of Kabul over the  weekend following a sweeping offensive that allowed them to capture all major cities with almost no resistance.

The swift capture of Kabul by the Taliban also sparked an exodus of senior government figures and foreign diplomatic personnel. At the same time, hundreds of Afghan military personnel sought to cross into Uzbekistan on board dozens of planes and helicopters that were forcibly landed by the Uzbek forces.Hundreds of people desperate to leave Afghanistan also rushed to the Hamid Karzai International Airport (HKIA) in Kabul, which is surrounded by the Taliban.

In another shocking development, people were clinging to the side of a US military aircraft, attempting to escape Afghanistan amidst a chaotic withdrawal, but apparently fell from it as the jet was gathering height. The US Air Force also announced earlier that human body parts were found in the wheel well of the plane so many were desperate to get on.