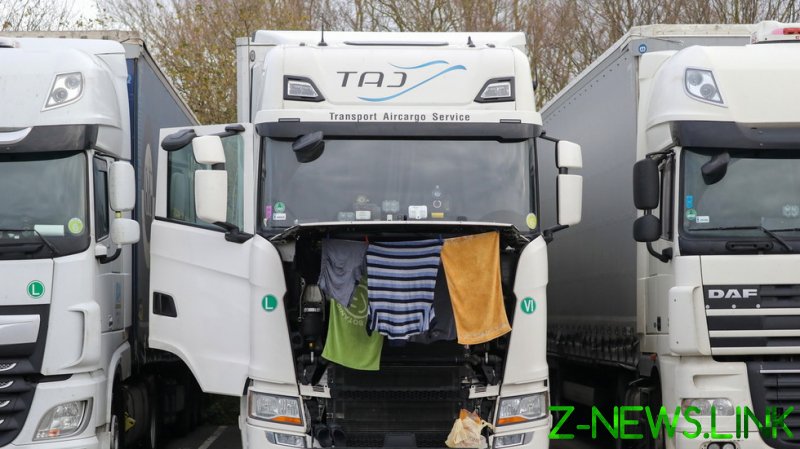 It comes after France shut their borders to Brits following the discovery of a new coronavirus variant in the UK that a government health chief said had spread “everywhere” throughout the country.

Shapps’ French counterpart Jean-Baptiste Djebbari thanked him for the progress made, as he announced in a tweet that planes, boats and Eurostar trains would resume service between the UK and France from Wednesday morning.

However only British or EU citizens normally resident in France will be able to travel, and only after they have provided a negative Covid-19 test that is able to detect the new mutation.

Shapps said in a tweet that there had been “good progress today and agreement with the French Government on borders,” with the new arrangements set to last until January 6.

He and French Prime Minister Jean Castex both said that more details would be released in the next few hours, while Shapps urged hauliers to avoid travelling to Kent for the time being.

Aerial footage on Tuesday showed hundreds of HGVs backed up along the M20 motorway leading to Dover, while the runway at Kent’s Manston Airfield was being used as an overflow lorry park for almost 1,000 lorries.

According to the Times, the British Armed Forces will be drafted in to conduct lateral flow Covid-19 tests on up to 6,000 lorry drivers a day at the airfield, although drivers must be screened 72 hours before they cross the English Channel.

On Tuesday evening dozens of angry lorry drivers appeared to stage a mini protest in Dover at not being allowed to cross into France and therefore make it home in time for Christmas.

MPs also blasted Boris Johnson for his handling of the crisis, branding him “a liar,” after the prime minister claimed on Monday that only 170 lorries had been queued on the M20.

There have also been reports of Brits panic-buying food amid fears of shortages due to the border situation, while the chief of industry body, the British Retail Consortium, Andrew Opie, said he expected delays in the supply chain.

“Unless movement resumes in the next 24 hours, from December 27 some fresh produce will not make it to shelves,” he told MPs in Parliament on Tuesday.

The chaos comes as the UK government’s chief scientific adviser warned that a new coronavirus variant, which is reportedly more contagious, had spread across the UK.

However the World Health Organization’s emergencies chief Mike Ryan sought to dispel fears over the mutation on Monday as he said there was “zero evidence that the new coronavirus variant increases severity of the disease.”