Home / WORLD / UK evacuation flight to pick up Pen Farthing & his rescue animals from Kabul cancelled after backlash, but effort is on

UK evacuation flight to pick up Pen Farthing & his rescue animals from Kabul cancelled after backlash, but effort is on 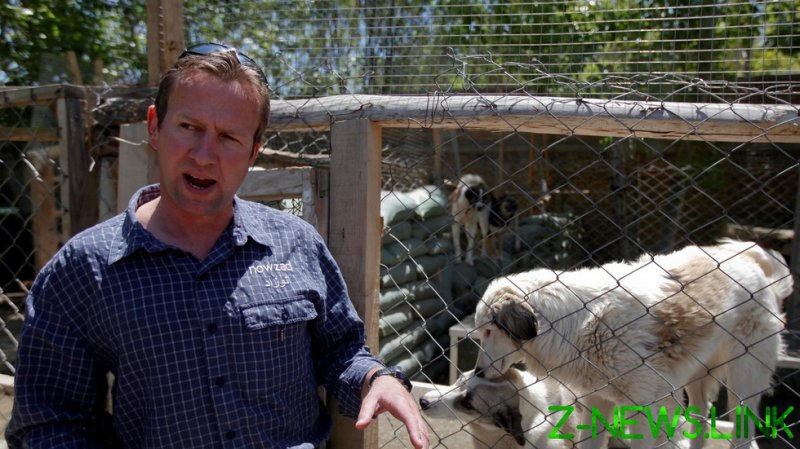 The aircraft was scheduled to depart from Britain’s Luton Airport and arrive in the Afghan capital to evacuate Farthing’s team on Friday, but was called off soon after a pair of suicide bombings rocked the Kabul airport and a hotel nearby, the BBC reported.

The evacuation attempt would have seen Farthing – a former Royal Marine – along with around 68 of his staff, 150 rescued cats and dogs and other people described as “vulnerable” fly out of the war-torn country the same day. The effort proved controversial, with critics arguing it prioritized animals over humans.

After two explosions outside the Kabul airport killed at least 13 US servicemen and dozens of Afghan civilians on Thursday, wildlife protection activist Dominic Dyer told the BBC that the situation was “too dangerous” for a private flight from the UK to “enter Kabul airspace safely” and that an alternative would have to be arranged.

There are now plans to evacuate Farthing and his team using a plane from a neighboring country, Dyer said.

“We have an option in place in a neighbouring country to lift Pen, his staff and animals out of Kabul before transferring them to the UK,” he explained.

However, an evacuation would still rely on Farthing and his team being able to reach the airport safely. In a series of tweets on Wednesday, UK Defence Secretary Ben Wallace said that he directed the Ministry of Defense to “facilitate” the processing of Farthing and “all other eligible personnel” once they reach the airport.

“No one has the right in this humanitarian crisis to jump the queue,” Wallace said.

Farthing has been engaged in a bitter row with the UK government over the past week, claiming he was cut off from his emergency contact line and that his charter plane hadn’t been given permission to access the airport. On Tuesday, Wallace dismissed Farthing’s accusations as “bollocks,” while pointing out that the UK had to prioritize humans over animals due to limited resources.

Though the plan to evacuate Farthing and his team found plenty of public support, many were not happy to see animals scheduled for rescue when many vulnerable Afghan civilians have been forced to wait in crowded, chaotic and – as Thursday’s bombings proved – dangerous lines around the airport.

“I love animals but surely the poor people of Kabul should come first,” one person wrote on Twitter, while another questioned why it was considered appropriate for animals to take priorty over women and children.

Dyer and Farthing have pushed back against the critics, saying the animals were supposed to be transported in the aircraft’s hold and would not take up space meant for human passengers.

“There will be nothing else in the hold, you can’t put people in there,” Dyer told GB News on Thursday, adding that spare seats would be used to accommodate Afghan refugees.

Western nations have scrambled to complete evacuations of diplomatic staff, aid workers and local allies before the end of the month, a date first set by US President Joe Biden as a deadline for the operations and since agreed to by the Taliban. US forces are providing most security at the airport, forcing other countries to finish evacuations before American GIs depart.

Ahead of the explosions in Kabul on Thursday, the UK government said there was credible intelligence to suggest a terrorist attack may take place. The Taliban later claimed to be the source of that intelligence.