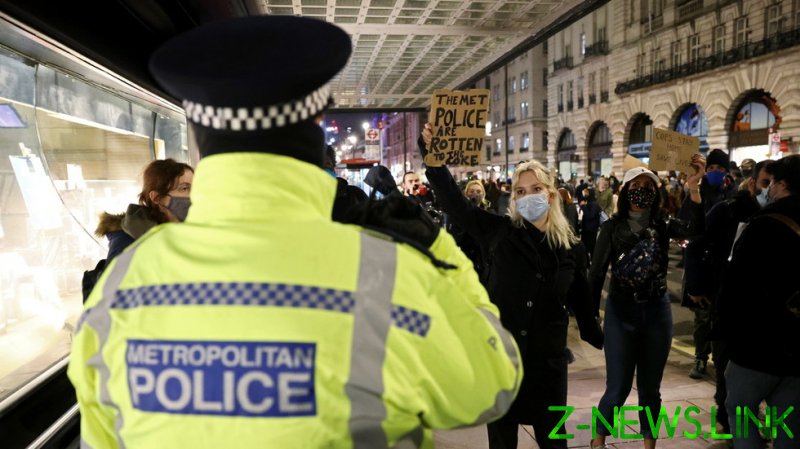 “They told me what I need to do and pick up girls and get them to them,” the 48-year-old Couzens told his interviewer in a video released by London’s Metropolitan Police on Wednesday. He said the gang, which was from the “Bulgaria, Romania, Albania” region, pressured him after he had tried to “rip off” one of their prostitutes and that they threatened his family members.

“It then came through that they’re gonna harm my family, take them away, and they would use them instead,” Couzens said. “At that point, I had no option but to try and find somebody.”

The interview took place at Couzens’ home in Deal, Kent, after he was arrested on March 9. Shown sitting on a sofa with his hands cuffed, he initially tried to claim that he knew nothing about Everard’s disappearance other than hearing from media reports that she went missing in London about a week ago.

But a little more than a minute later, after the investigator told him that police believe he was involved in Everard’s disappearance, Couzens began to tell his story of the Eastern European gang. “They threatened to take my family away from me, so at that point, I’m doing what I can for my family,” he said.

Couzens said that he abducted the 33-year-old Everard and delivered her to the gang near Charing racecourse in Ashford, Kent. He later said that “if I could do something to get her back right this minute, I would,” but he had no regrets about his decision to abduct her. “I’ll do it again tomorrow if it means saving my family…,” he said. “These guys mean business.”

The day after the police interview, Everard’s body was found in a wooded area of Ashford, Kent, about 100 meters away from land owned by Couzens. He reportedly answered “no comment” in subsequent interviews.

Footage of the March 9 interview was played at Couzens’ sentencing hearing in London. Prosecutors also presented evidence that the cop used Covid-19 rules as a false pretext to arrest Everard as she walked home on a South London street and drive her away in a rented car to Kent, where he raped and killed her.

Everard’s death set off a wave of protests over violence against women, which escalated after police forcefully broke up a vigil mourning the murder victim. Although the perpetrator was already known to be a Metropolitan Police officer, the UK government responded by targeting men in general, saying misogyny would be treated as a hate crime on an “experimental basis.”

It came to light in reporting on the Everard case that police had allegedly failed to investigate several cases of indecent exposure linked to Couzens.