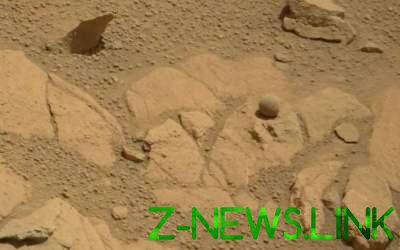 In order to prove his innocence, ufologist, writes that a perfect sphere could not form on the planet.

Lovers of conspiracy theories was again fully armed, ready to blame NASA of concealing important findings. However, scientists clearly mess.
Earlier on Mars was found supposedly the arms and body of the President of the United States.

However, no less excitation ufologists called the, which ordinary stone they took for the Cannonball.

On one of the images made by cameras of the Curiosity Rover lovers considered old Cannonball, which with a light hand ufologist Scott Waring was the “true evidence” of the war on the red planet, but it turned out to be wrong.

In order to prove his innocence, ufologist, writes that a perfect sphere could not form on the planet. Therefore, the discovery appeared on the surface after it skidded unknown forces, namely the aliens.

Earlier on the red planet have found the steps of the pyramid, which was once built by the ancient civilization. This opinion was expressed by the same ufologist, making out in the photo of the Mars Rover Curiosity strange shape.