UAE FM visits Syria as US fumes over ‘normalization’ 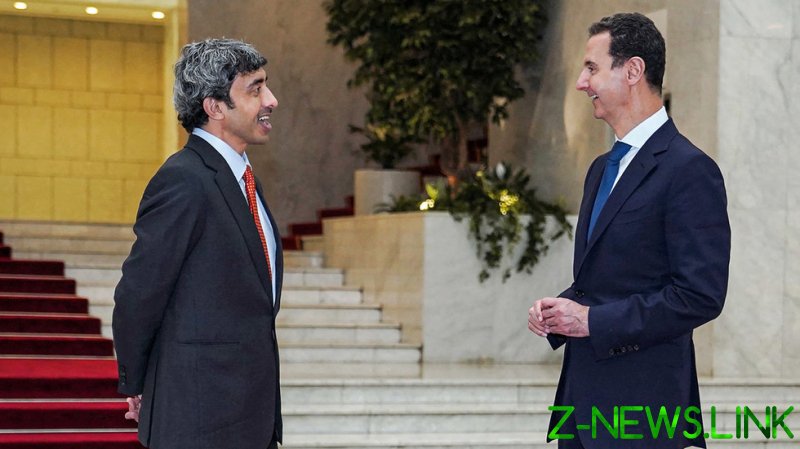 Sheikh Abdullah is the most senior official of a Gulf state to visit Syria since 2011, when an armed rebellion broke out against the government in Damascus. Originally backed by regional powers, including the UAE, the militants failed to achieve their goal and have been reduced to parts of the northwestern Idlib province and support from Turkey alone.

The Syrian government released photos of bin Zayed’s meeting with Assad and other Syrian officials on Tuesday, confirming the visit.

The UAE reopened its embassy in Damascus in 2018, and called for Syria to be readmitted into the Arab League earlier this year. Syria was also given a space at the Dubai Expo trade fair that began in early October, as the UAE Ministry of Economy tweeted that Damascus was its most prominent global trade partner in 2021.

Washington, meanwhile, continues to insist that “Assad must go.” The ranking member of the Senate Foreign Relations Committee, Idaho Republican Jim Risch, tweeted that it was “shameful that a growing number of countries are open to normalizing relations with Assad” and that the UAE was “ignoring the ongoing violence against Syrian civilians.”

Joel Rayburn, former US special envoy for Syria, dismissed regional attempts to normalize relations as “doomed to fail” and argued they will “always be limited by America’s permanent unwillingness to see Assad rehabilitated.”

The US maintains crippling ‘Caesar Act’ sanctions against anyone aiding Syria’s reconstruction, and is using its support of Kurdish-led SDF militia to block the northeast of the country from reunifying with Damascus.

However, Syria’s neighbors are increasingly crossing the US picket line. Last month, Jordan’s King Abdullah spoke with Assad by phone for the first time since the outbreak of the war. The Egyptian FM met with his Syrian counterpart in September, while Bahrain and Oman reopened their embassies in 2019 and 2020, respectively.