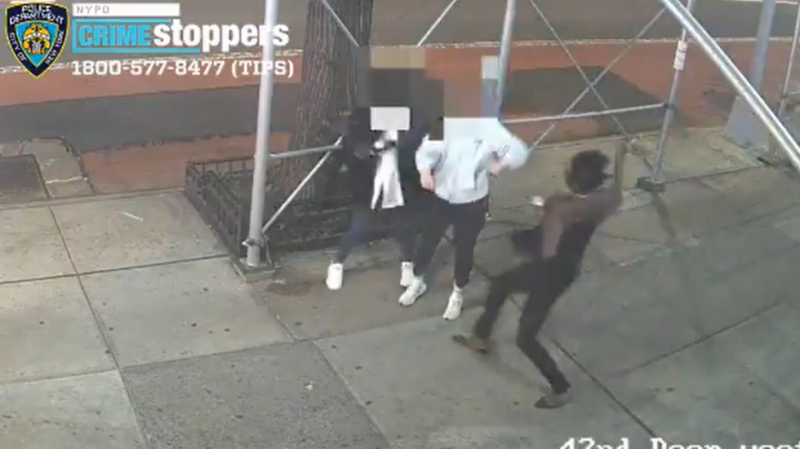 The incident occurred on Sunday evening, when a black woman allegedly told two Asian women walking on West 42nd Street to take off their masks. Surveillance footage released by police shows the assailant then begin to swing a hammer at the two Asian women. After striking one of the women in the head, she circled around and took errant swings at the other woman.

The woman who was struck, a 31-year-old Taiwan native, was hospitalized with an injury to the upper-left side of her forehead that required seven stitches. She was out of the hospital on Monday and told ABC7 News that she now plans to move back to Taiwan. The recent graduate of New York’s Fashion Institute of Technology had returned to the city last month to look for a job.

The unidentified victim said she and her friend were trying to quickly walk around the black woman, who had been acting erratically, when the assault began. She had begun carrying pepper spray to protect herself amid this year’s 400% surge in anti-Asian hate crimes in New York City, but she didn’t have it with her on Sunday evening.

According to New York City’s Hate Crimes Task Force, there have been 80 such attacks on Asians in the city so far this year, up from 16 at the same point in 2020. Some of the more high-profile cases have been horrific. Late last month, a 61-year-old was knocked to the sidewalk from behind while collecting aluminum cans for recycling. The assailant then stomped on his head at least six times before walking away.

A black man who was on parole for murdering his mother in 2002 was arrested in March for allegedly attacking a 65-year-old Asian woman in front of a Manhattan apartment building. Surveillance video showed the woman being kicked in the chest, being knocked to the ground, then kicked in the head repeatedly as onlookers watched without doing anything to help her.

In another incident, a 61-year-old Filipino-American man was slashed from ear to ear with a box cutter by a black man on a subway car in February. Witnesses not only did nothing to try to stop the attack, but none even called police or an ambulance afterward. Activists responded by holding a rally against white supremacy the following weekend.

The Times Square hammer attack wasn’t the city’s only anti-Asian assault of the weekend, either. On Saturday, a man outside Grand Central Station reportedly told an Asian couple that they were “dangerous” and “don’t belong here” before hitting the woman, 50, in the head with a bag of chips.

That the latest attack occurred in Times Square – and the assailant was able to gather her things and slowly walk away without being confronted – is emblematic of New York’s struggles since the Covid-19 pandemic began. Lockdowns have ravaged the city’s economy, including tourism, and surging violent crime has diminished quality of life.