Home / WORLD / Two decades on from 9/11, the US has paid a heavy price for its War on Terror

Two decades on from 9/11, the US has paid a heavy price for its War on Terror 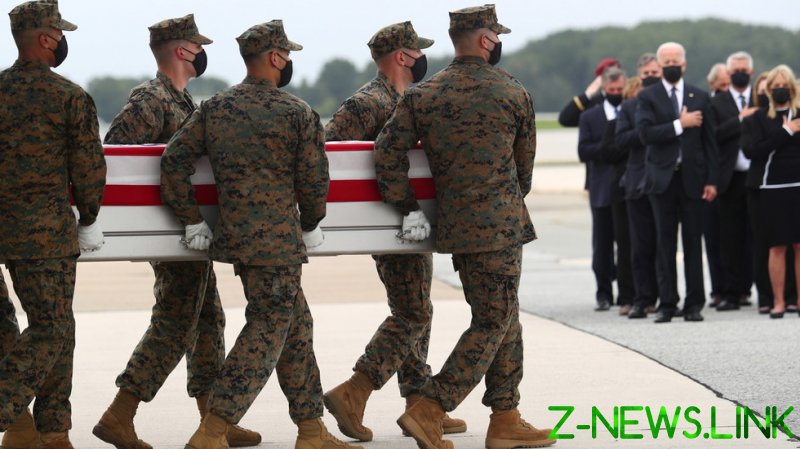 From the moment the first hijacked Boeing 767 slammed into the North Tower of New York’s World Trade Center, the world was changed forever. By the end of September 11, 2001, 3,000 Americans were dead, and the US was at war.

“We will make no distinction between the terrorists who committed these acts, and those who harbor them,” President George W. Bush told the nation that evening, promising to “win the war against terrorism.” Three weeks later, American troops invaded Afghanistan, on the hunt for Osama Bin Laden, who US intelligence had blamed for the attack by midday on 9/11.

The mission would spiral into a two-decade quagmire, paid for with trillions of dollars and thousands of American lives. 20 years later, a sober evaluation reveals massive expenditure and little gain.

The war in and occupation of Afghanistan concluded just a month shy of the 20-year anniversary of 9/11, and cost the United States more than $2.3 trillion dollars, a figure that doesn’t take into account another half a trillion dollars of interest owed on money borrowed to fight the war, and $233 billion paid caring for the nearly 21,000 veterans wounded in Afghanistan. 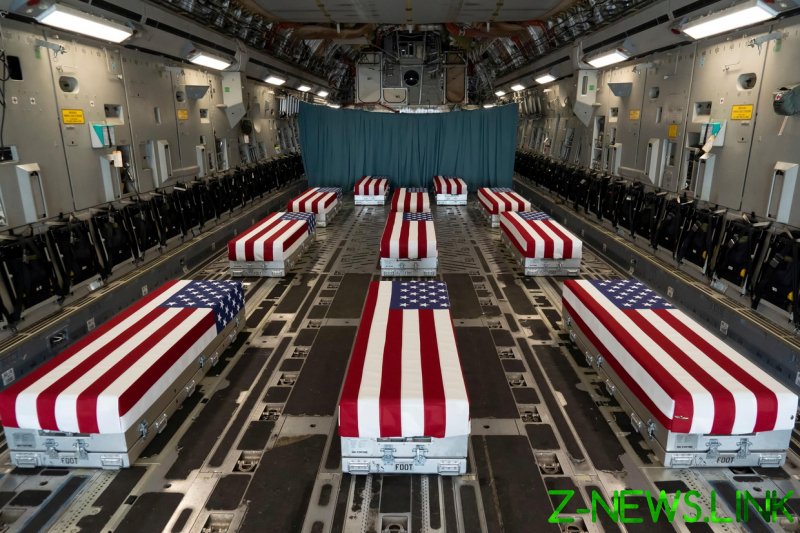 Flag-draped transfer cases of US military service members who were killed by an August 26 suicide bombing at Kabul’s Hamid Karzai International Airport line the inside of a C-17 Globemaster II prior to a dignified transfer at Dover Air Force Base, Delaware, August 29, 2021 © Reuters / US Marines

The US quickly dislodged the Taliban from power, and Bin Laden was eventually gunned down by Navy SEALs in Pakistan in 2011, but by that time, the US was already committed to nation-building in Afghanistan. The effort to remake Afghanistan as a democracy was an abject failure, with the Afghan National Army crumbling before the Taliban’s advance this summer, and the US-backed government abdicating and fleeing Afghanistan as the militants closed in on Kabul.

After 20 years and four US presidents, Afghanistan is back under Taliban control, and reports have already surfaced of Al-Qaeda members operating within its borders once again.

By mid-afternoon on September 11, 2001, the Bush administration was looking for an excuse to pin the attacks on Iraqi leader Saddam Hussein. Secretary of Defense Donald Rumsfeld asked his aides to gather information “good enough to hit SH (Saddam Hussein) at [the] same time” as Osama Bin Laden, instructing them to “sweep it all up. Things related and not.” 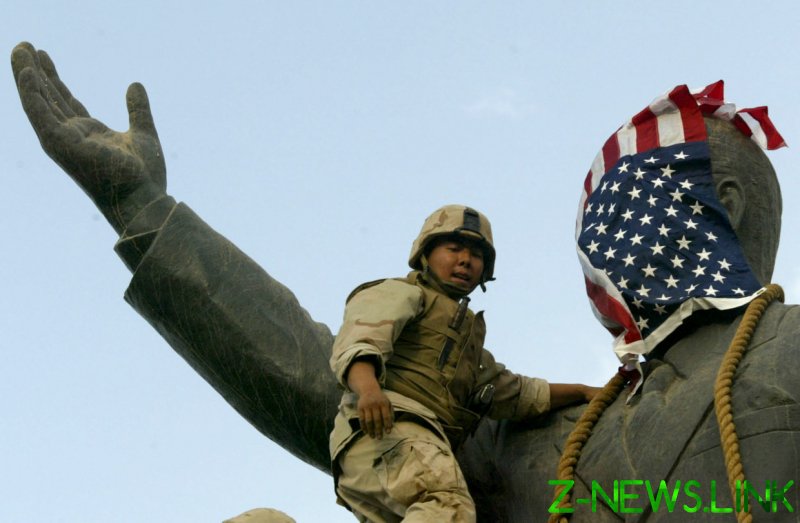 A US Marine covers the face of a statue of Iraqi President Saddam Hussein with a US flag in Baghdad, Iraq, April 9, 2003 © Reuters / Goran Tomasevic

The US invaded Iraq in March 2003, with a ‘shock and awe’ bombing campaign preceding a lightning-fast mechanized advance. The initial military operation was a success, and Bush infamously declared “mission accomplished” less than two months after the invasion began.  However, the invasion gave way to a protracted insurgency and a power vacuum that led to the horrifying rise of the terrorist group Islamic State (IS, formerly ISIS).

A small number of US troops remain in Iraq and, to date, the war has cost the United States roughly $1.2 trillion and claimed the lives of more than 4,500 US troops and wounded more than 32,000. As many as 200,000 Iraqi civilians were killed, and the country’s economy and infrastructure was wrecked by years of fighting. 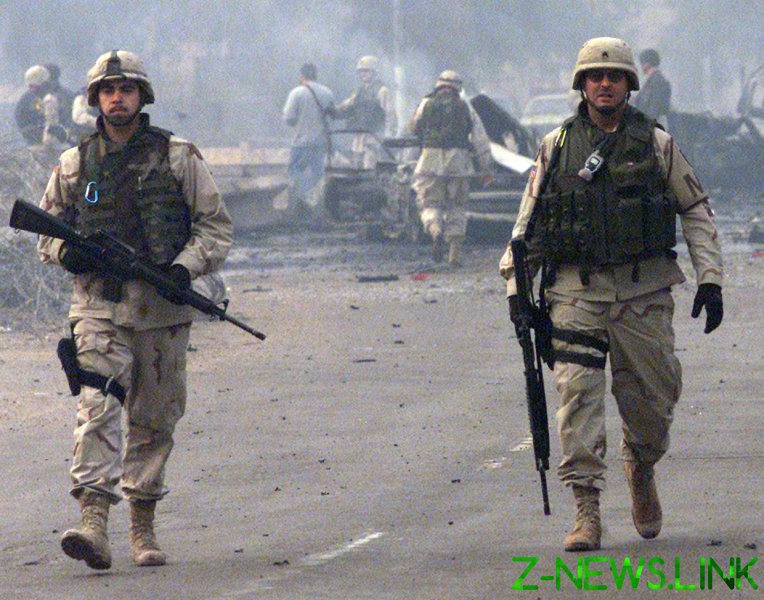 US Army soldiers secure the scene after a blast outside the headquarters of the US-led administration in Baghdad , Iraq, January 18, 2004 © Reuters / Ali Jasim

Saddam Hussein had no links to the 9/11 attacks and was not harboring weapons of mass destruction, as the US and allies initially insisted.

When Congress granted Bush authorization to hunt down Osama Bin Laden, it issued a blanket ‘Authorization for Use of Military Force Against Terrorists’ (AUMF) that granted the president authority to use all “necessary and appropriate force” against anyone suspected of involvement in the 9/11 attacks, no matter how tangentially.

The AUMF has been renewed every year since, and has been invoked to justify military action in Afghanistan, Djibouti, Eritrea, Ethiopia, Georgia, Iraq, Kenya, Libya, the Philippines, Somalia, Syria, and Yemen. None of these operations conclusively benefited US national security.

At home, the 9/11 attacks resulted in the creation of the Department of Homeland Security, the most significant reorganization of government since the Defense Department was created in 1947.

The passage of the USA PATRIOT Act in 2002 dramatically expanded the power of law enforcement agencies to conduct warrantless surveillance on Americans, allowed the indefinite detention without trial of immigrants, and changed the Foreign Intelligence Surveillance Act process, granting permission for Americans to be spied on as foreign agents once were, and as the FBI did on Trump’s campaign in 2016.

As the CIA abducted and tortured terror suspects worldwide, an emboldened FBI hunted down would-be attackers within the US. In many cases, the agency arrested suspects in dubious sting operations or entrapped young men who otherwise may never have committed any acts of terrorism.

What if the US had pursued another path after the 9/11 attacks? It’s anyone’s guess what the casualties of the War on Terror could have achieved, were their lives not cut short, but it’s easier to outline what the $5.8 trillion spent on America’s post-9/11 wars could have gone toward instead. 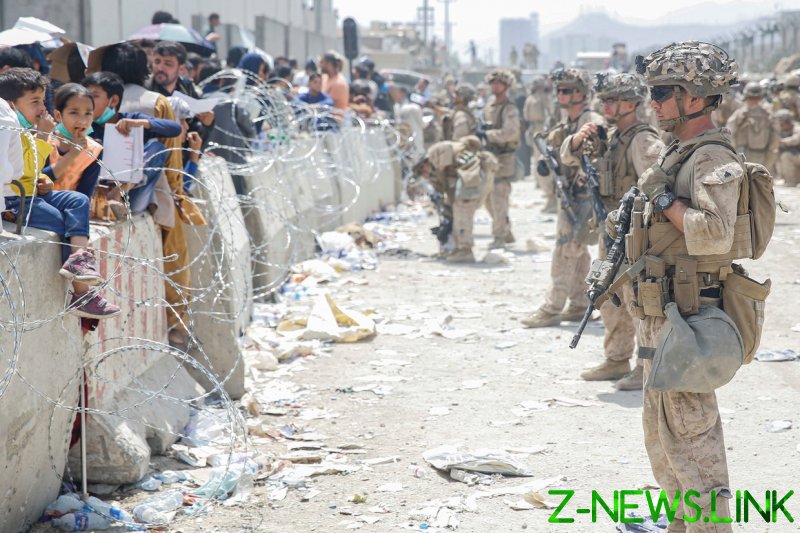 US Marines provide assistance during an evacuation at Hamid Karzai International Airport in Kabul, Afghanistan, August 20, 2021 © Reuters / US Marine Corps