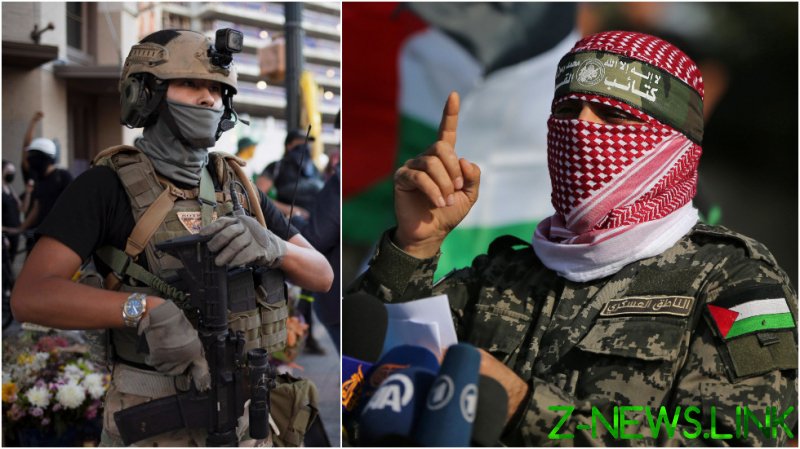 Benjamin Ryan Teeter, 22, and Michael Robert Soloman, 30, were each slapped with charges for “conspiring and attempting to provide material support to a designated foreign terrorist organization,” the DOJ said on Friday, claiming the men acted on a “witch’s brew of ideological motivations.”

“These defendants sought to use violence against the police, other government officials and government property as part of their desire to overthrow the government. While planning these activities, the defendants met individuals whom they believed to be members of the foreign terrorist group Hamas,” said John Demers, assistant attorney general of the DOJ’s national security division.

Solomon and Teeter, who are said to belong to a group known as “Boojahideen,” expressed a desire to act as “mercenaries” for the Palestinian militant group as a way to earn money for the broader Boogaloo movement, the DOJ said, including funds for “recruitment” and “land for a training compound.” They also offered to manufacture and sell untraceable weapons and parts to the group, including suppressors, as well as to modify guns to fire on full-auto.

The FBI was first alerted to the men through an informant, and they would later speak to an undercover agent they believed was a senior figure in Hamas, with whom they shared “ideas about destroying government monuments, raiding the headquarters of a white supremacist organization in North Carolina, and targeting politicians and members of the media.”

Both men had previously appeared in media reports on the Boogaloo movement, a loose faction of anti-government activists who believe a second civil war is on the horizon and often attend protests armed and in military kit. Teeter, who participated in protests in Minneapolis following the police killing of George Floyd, told CNN in June that his goal was to protect demonstrators from law enforcement and white supremacists, describing himself as an anarchist.

Teeter and Soloman were both apprehended on Thursday night and await a hearing in Minneapolis next week, while Teeter also has a pending charge for discharging a firearm in New Hanover County, North Carolina from a previous incident, which he told CNN was an accident while cleaning his gun.