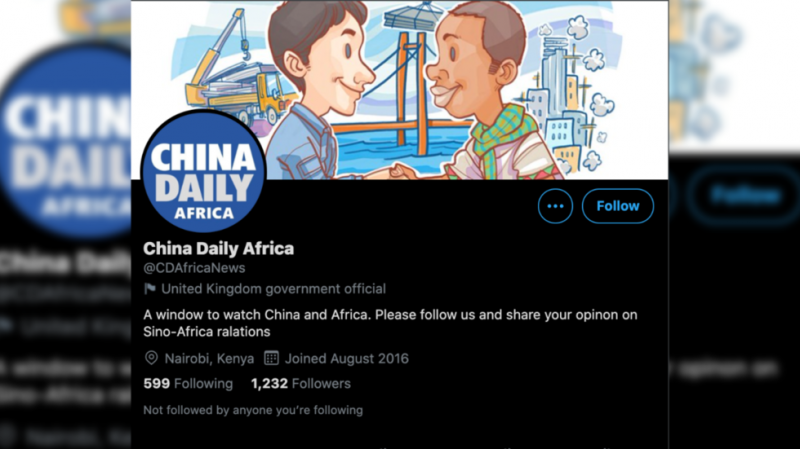 The China Daily is an English-language daily newspaper owned by the Publicity Department of the Chinese Communist Party, with a global distribution managed by offices in cities like New York City, Washington, D.C., London, and Kathmandu. In December 2012, it also established an African edition, published out of Nairobi, Kenya.

After almost a decade in operation, then, it came as quite a shock on Thursday when Twitter decided to label the African arm of the Chinese publication as a “United Kingdom Government Official.”

None was more shocked than China Daily EU bureau chief Chen Weihua, who took the opportunity to skewer the tech giant for what he dubbed “bias against Chinese accounts.”

Other, equally baffled commenters shared their derision and dismay at the algorithmic aberration, with some describing it as a joke and a shame, while others said the gaffe was “Almost an insult.”

Some couldn’t miss the opportunity to throw some shade the UK’s way, amid escalating tensions between London and Beijing and a back-and-forth censoring and deplatforming of each other’s national broadcasters.

“They’ve finally figured out how to label an account untrustworthy,” quipped one Twitter user. “Can this be used as evidence to demand a salary payment from the British government?” snickered another.

“Oops, that’s what happens when a tech company politicizes everything and poses as the arbiter of truth,” wrote one user, clearly fed up with Silicon Valley censorship.

Twitter instituted a policy targeting state-owned or affiliated accounts in the summer of 2020, ostensibly aimed at making “the experience more transparent,” but they may have inadvertently exposed severe flaws in their own algorithm in the process.