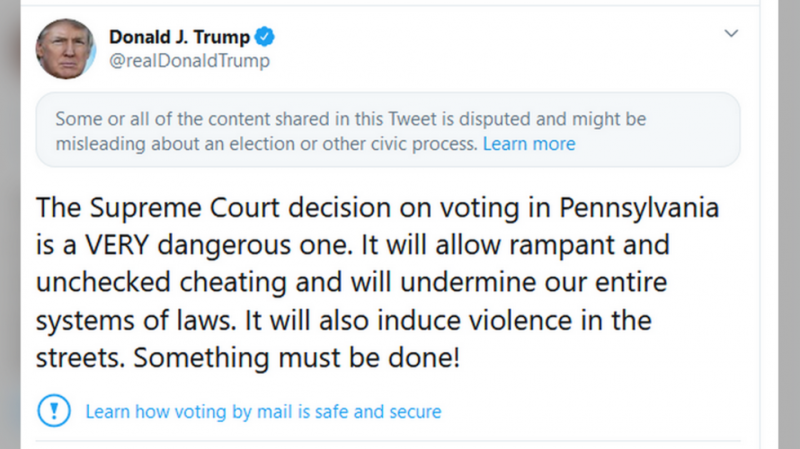 “Some or all of the content shared in this Tweet is disputed and might be misleading about an election or other civic process,” reads the warning the platform attached to Trump’s tweet, in which the president aired his grievances over a recent SCOTUS decision to allow mail ballots that arrive three days after November 3 to be included in the Pennsylvania tally.

“The Supreme Court decision on voting in Pennsylvania is a VERY dangerous one,” Trump argued in the tweet, referring to the court’s decision last week to deny a GOP request to block the three-day extension for counting late-arriving ballots that had been granted by Pennsylvania’s top court.

The Republicans wanted the SCOTUS to fast-track their motion, and, although they did not succeed, several conservative justices indicated they might take up the issue after election day.

The GOP insists that the extension runs afoul of the US Constitution, arguing that the organization of the electoral process is up to state legislatures, rather than state courts.

As he heaped scorn on the ruling, Trump rehashed his claim that the delayed ballot count “will allow rampant and unchecked cheating and will undermine our entire systems of laws.”

It will also induce violence in the streets. Something must be done!

Trump has repeatedly alleged that the system of universal mail-in voting is highly vulnerable to fraud and abuse, arguing that the postal service is unprepared  to deal with an unprecedented surge in absentee ballots streaming into the system due to the Covid-19 pandemic.

The US Postal Service, however, brushed off these concerns, with Postmaster General Louis DeJoy saying in September that the service was “equipped” to deliver the ballots.

Pennsylvania is one of the key battleground states, representing 20 Electoral College votes out of the 270 needed to win the race.