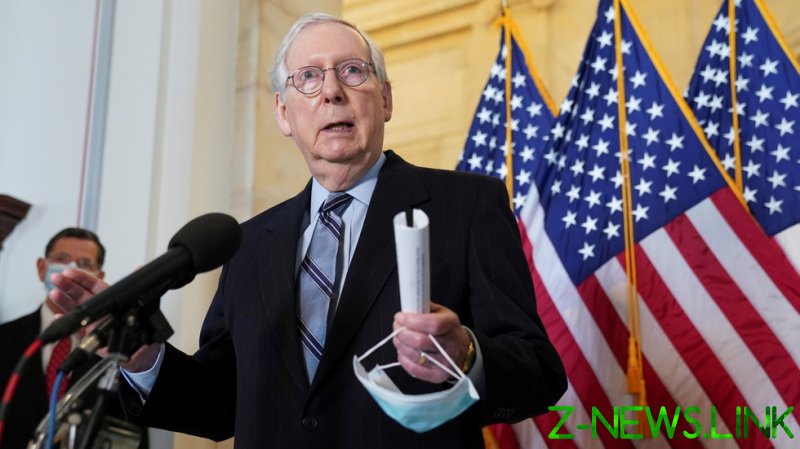 “Americans do not need or want big business to amplify disinformation or react to every manufactured controversy with frantic left-wing signaling,” Republican Senate Minority Leader Mitch McConnell said in a statement on Monday.

The unusual attack from McConnell against big business – which for a long time was a reliable ally of the Republican Party and recipient of benefits stemming from its policies – came over the controversial election law passed by Georgia last week. The 98-page bill makes early and absentee voting somewhat harder, empowers the state legislature’s role in running elections, and introduces other changes – including making it a crime to offer food and water to voters waiting in line.

The law was decried as “the new Jim Crow” by the Democratic side, which claimed it was passed in response to the surprise victories of two Democratic Party candidates in the run-off election in January. ‘Jim Crow’ refers to the discriminatory policies targeting black Americans during the segregation era.

The Republican-controlled state wants to suppress voting by black people in Georgia with the new rules, critics say. However, it still remains to be seen whether the law would actually lead to noticeably lower turnout among Democratic voters.

Some corporations with a strong presence in Georgia, like Coca-Cola and Delta, have criticized the new law, and Major League Baseball has pulled the 2021 All-Star Game out of the state in protest. McConnell said these companies are “behaving like a woke parallel government” and would “invite serious consequences if they become a vehicle for far-left mobs to hijack our country.”

Some said if McConnell really wants corporations to stay out of politics, he should support the very same Democratic election reform that he has spoken out against.