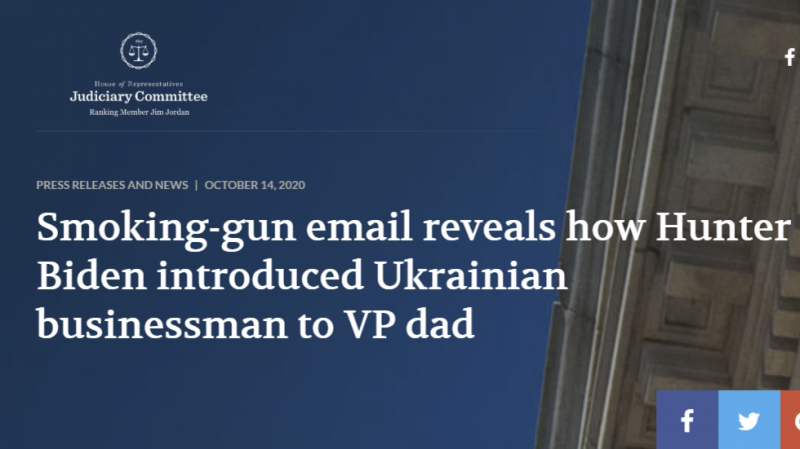 When the New York Post published a tranche of emails on Wednesday claiming to reveal Hunter and Joe Biden’s alleged backroom dealings in Ukraine, the story spread like wildfire. That is, until Twitter and Facebook began preventing users from sharing links to the incriminating article. As Republicans and conservatives decried the apparent “censorship,” Twitter CEO Jack Dorsey stepped in to clear the air, explaining that the article contained “hacked material,” and was therefore in breach of Twitter’s rules.

The Republicans of the House Judiciary Committee skirted the ban by placing the article on their official .gov website, telling followers to “Click, Share, and RT” the scandal-laden story.

However, users trying to click the link were met on Thursday with a warning from Twitter, telling them that the link “may be unsafe.”

“The link you are trying to access has been identified by Twitter or our partners as being potentially spammy or unsafe,” the warning read, stating that its content could “steal personal information or harm electronic devices,” could “mislead people or disrupt their experience,” and could contain “violent or misleading content that could lead to real-world harm.”

Conservatives were outraged. “They aren’t even hiding their bias anymore,” the Judiciary Republicans tweeted. “This is an attack against conservatives.” Rep. Mark Walker (R-North Carolina) called the link suppression “election interference.”

Twitter reversed its ban later on Thursday morning, as the Judiciary Republicans’ link worked as normal by then. A Twitter spokesman told the conservative Daily Caller that the decision to label the website “unsafe” was an “error.”

Nevertheless, Republicans on the House Oversight Committee requested an emergency hearing on “Big Tech’s repeated efforts to interfere in the 2020 election,” before voters go to the polls. Senator Josh Hawley (R-Missouri), who sits on the Judiciary Committee, also called on Thursday for Dorsey and Facebook CEO Mark Zuckerberg to testify on potential “campaign law violations.”